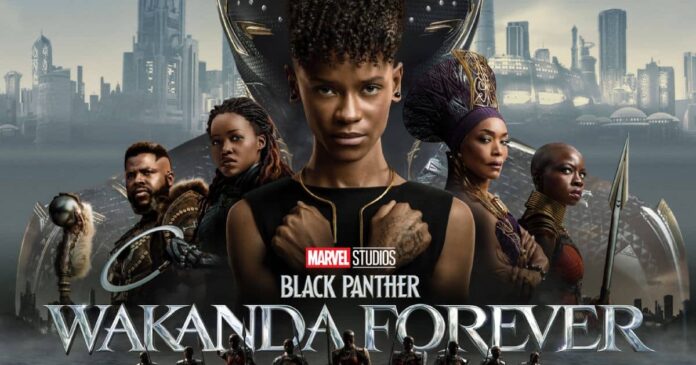 Synopsis: Black Panther: Wakanda Forever starts with the kingdom of Wakanda grieving as the reigning king T’Challa (Chadwick Boseman) has passed away. Queen Ramonda and Shuri are vulnerable because while processing the death of T’Challa, they also have to take care of Wakanda, a once powerful but now dangerously vulnerable kingdom. If this wasn’t enough, a threat is rising in the form of Namor, King of Talokan which is a mysterious underwater kingdom. Now it’s up to Shuri to carry forward and protect her dead brother’s legacy.

According to their review, the writers of the movie did not waste any time in paying their tribute to Chadwick Boseman. The first 30 mins of the movie will melt the coldest of hearts and will have you shed a tear or hundred for that matter. Even though the grief is heavy for both the characters in the movie and the MCU fans watching, it’s not the central plot of the movie. The movie perfectly interlaces with the original Black Panther and hits the right amount of nostalgia. Stellar performances throughout the movie can be seen by the entire cast but Angela Bassett and Letitia Wright steal the show and how. The audience finally get to see Namor, a marvel character all comic book fans have been waiting for.

Along with Namor, comes Talokan the mysterious underwater civilization. The differences and similarities between Wakanda and Talokan is superbly shown thanks to the amazing cinematography. The costumes represent culture in the best way possible. The movie is laced with the trademark MCU humor and the BGM is just out of this world. It’s so powerful, it helps build up the scenes beautifully. The final battle just like any other good marvel movie is just amazing and edge-of-the-seat entertainment.

One unusual thing is though even though Black Panther: Wakanda Forever is the last movie of Phase 4, it is not completely connected to the phase 4 storyline which surprisingly works well for the movie.

The mid-credits scene will have fans dropping their jaws on the floor and there’s also a superstar cameo to look out for!

To sum it up, Marvel studios knocked it out of the park with this one.

According to their review, the unexpected passing of the lead actor of a film series is both devastating for the fans as well as the cast and makers of the film. But Ryan Coogler handled that curveball with enough respect and grace. He invites the audience to grieve the fallen hero and at the same time builds a new world which is a visual spectacle.

There is no specific introduction of Talokan even though it’s a mysterious underwater kingdom. The movie is heavy with grief and emotions but at the same time, focuses on hope. The cast has not disappointed neither has the BGM or cinematography.

Overall, definitely watch this movie over the weekend.

The untimely passing of Chadwick Boseman left everyone heartbroken. It’s difficult to bounce back from something like especially since he passed in 2020. According to TOI review, the director Ryan Coogler has drawn inspiration from that sorrow and has managed to deliver a film which is a visual entertainer that makes your heart heavy but also gives you hope.

A special Marvel studios logo can be seen which is dedicated to Chadwick and that sets the tone for the film. Marvel movies have been focusing too much on the comic side of things lately but this movie does just the opposite. Even though it has its moments of fun, the movie never steers clear of its substance and manages to deliver a fitting sequel to its predecessor.

The cast has passed the test with flying colors and so has the cinematography and BGM. The music of the movie hits all the right notes. All in all, this movie is one of the best MCU movies in a long time. Do not miss the post credits scene!