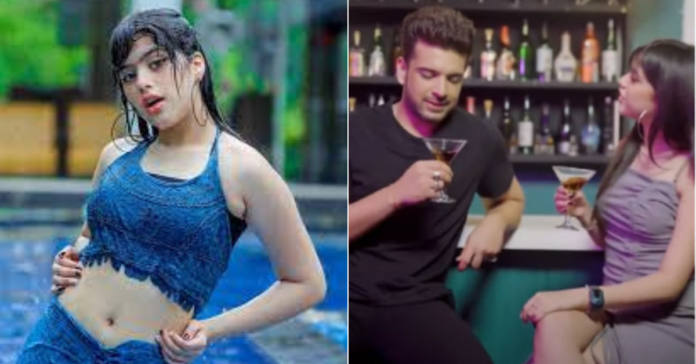 The video featuring Karan and Riva Arora has drawn criticism and disgust on social media, with rumors suggesting Riva’s parents use hormone therapy or steroids to make Riva appear like an adult.

Some rumors floated on social media that she went under the knife to enhance her breasts which would be highly unethical and problematic.

Karan Kundrra, who is 38 years old, plays the role of the boyfriend of Riva in the reel, who already has a relationship with another man. The idea behind the reel is to showcase that the actress in the reel has an affair with two men. Both the actors opposite Riva in the reel are adults, while Riva is not even a teen. The reel also contained a bar scene where the 12-year-old girl sits cross-legged wearing a very revealing dress. She even moves, talks, and uses the facial expressions of an adult woman who is dating 2 men.

Watch the video below :

One user lashed out at the makers saying, “Riva Arora is a minor who is being sexualized. It is disgusting public pedophilia that is being accepted and enjoyed while her parents are thrusting her into it. She was made to do opposite Karan Kundra who is 38 years old in a romantic act. Didn’t the makers know her age?

Who is Riva Arora?

Riva Arora was born on February 1, 2010, in Delhi, India. She was featured in Uri: The Surgical Strike. The Vicky Kaushal-starrer was a big hit in 2019, and one of the memorable scenes featured

She played the role of a child artist recreating the scene of the late Colonel MN Rai’s funeral, where his daughter shrieked an old Gorkha war cry to pay respect to her martyred father. Col Rai sacrificed his life in the line of duty in Tral, Kashmir, in January 2015. The child artist who recreated the scene in the film was Riva Arora. At the time of the film’s release, Riva was only nine years old.

Later she played the role of young Janhvi Kapoor in the film Gunjan Saxena: The Kargil Girl. When the film was released, Riva was ten years old. Apart from films, Riva appeared in several television commercials during her initial years as a child artist