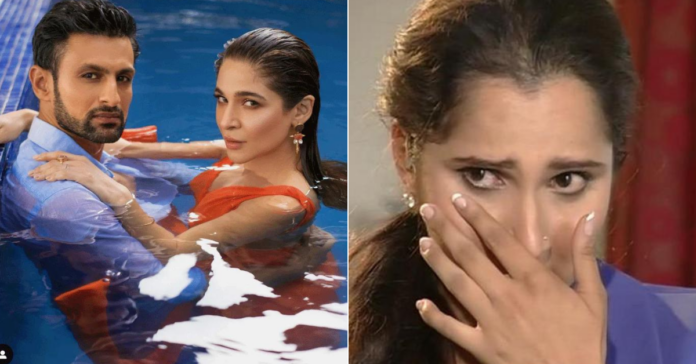 Sania and Shoaib are going to be officially divorced

Amidst rising rumors about the couple’s strained relationship, one of their close friends revealed that Sania and Shoaib Malik have already decided to part ways and only the paperwork formalities are left. Also adding fuel to the fire, Sania Mirza came up with a cryptic post giving rise to speculations that her marriage has HIT ROCK BOTTOM

Currently, Sania is in Dubai, and Shoaib is in Pakistan working for A Sports as an expert. A recent cryptic post by Sania sparked the separation rumors.

Ayesha Omar the reason behind the split?

Some media platforms have now brought another angle to the divorce rumors. Reports cite that the main reason behind Malik and Mirza’s Pakistani model named Ayesha Omar. She is the same model with him Malik had done a bold photoshoot.

After the bold photoshoot, Malik was questioned on a Pakistani TV channel on what was the reaction of his wife Sania to that photoshoot to which he did not give a concrete reply. Both Shoaib and Sania have remained silent about the matter.

Concurrently, another report quoted from a team member of Shoaib Malik’s management department says that the divorce is on. “Yes, they are officially divorced now. I can’t disclose more than that but can confirm that they have separated,” said reports quoting a person who was part of Malik’s management team in Pakistan.

Earlier, Sania had posted a cryptic Instagram post where she wrote: “The moments that get me through the hardest days.”

Who is Ayesha Omar?

Ayesha Omar is a popular Pakistani model, singer, Youtuber, and actress. She is a popular fashion icon in Pakistan with millions of followers on social media. She is the highest-paid actress in Pakistan and has appeared in many popular films and drama series. She is best known for her roles in Kollege Jeans, Kuch Lamhe Zindagi Kay, Meri Zaat Zara e Beneshan, and Zindagi Gulzar hai among others.

Sania and Shoaib got married in April 2010 in a starry wedding and during that time, their wedding created a huge controversy due to their marriage linking the two nations (India and Pakistan). The couple now has a four-year-old son Izhann and both Sania and Shoaib were last seen together, celebrating their son’s birthday.