FIFA 2022 : Top 5 nations with the most World Cup Trophies 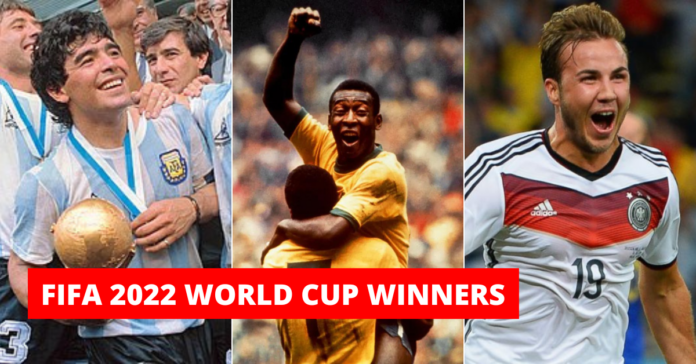 Winning the FIFA World Cup is a dream of every footballer. The first edition of the World Cup was held way back in 1930 and was won by Uruguay which was the host nation. Let us take a look at the top five teams who have won the World Cups the most times.

In the history of football, not a single nation has been as successful at it as Brazil. They have won five World Cup titles (most ever), and they remain the only team to have participated in every edition of the tournament. Over the years, Brazil produced some of the greatest players in the world, and many pundits consider their 1970 team to be the best squad to play the game. Brazil has participated 21 times in the World Cup (FIFA World Cup qualification not included).

Italy is one of the most successful national teams in the history of the World Cup, having won four titles (1934, 1938, 1982, 2006), just one fewer than Brazil. The team was present in 18 out of the 22 tournaments, reaching six finals, a third place, and a fourth place. The Azzurri have won the tournament four times before but won’t even be playing at the 2022 World Cup, despite being the current holders of the European Championship. For the second straight World Cup, Italy simply failed to qualify for the tournament.

Germany is the most successful European nation in FIFA World Cup history. The Germans have won the World Cup on four occasions, with only Brazil winning more global titles. Germany has never failed to qualify, although in 1950 none of the three German national teams that existed at that time entered qualifying. Germany has a formidable World Cup record. They did not enter the first edition back in 1930 and they were banned from the 1950 World Cup in Brazil after World War II, but they have participated in every other World Cup, winning the tournament on four occasions (three as West Germany).

Uruguay hosted and won the first FIFA World Cup in 1930, beating Argentina 4–2 in the final. They won their fourth and last title in 1950, upsetting host Brazil 2–1 in the final match. The team has qualified for thirteen World Cups, reaching the second round in ten, the semifinals five times, and the finals twice

The Argentina national football team has won two FIFA World Cups, one in 1978 and one in 1986, making them one of the most successful national teams in the world. Argentina was runner-up three times, in 1930, 1990, and 2014.