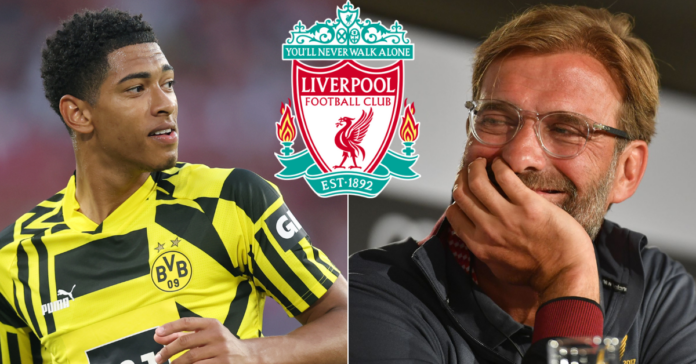 Liverpool fans have stepped up demands for their club to complete the signing of Jude Bellingham after he scored the opening goal in England’s 2022 FIFA World Cup Group B clash with Iran.

England scored three goals in the first half against Iran, with Bellingham netting his first-ever goal at a senior international tournament. It arrived at 35 minutes, with the Borussia Dortmund midfielder planting a header beyond substitute goalkeeper Hossein Hosseini.

Bukayo Saka and Raheem Sterling also got on the scoresheet as England went into the break in full control of the match. Saka added a second after the break before Mehdi T pulled one back for Iran.

They were backed by another fan: “Liverpool must go and get Jude Bellingham at all costs, what a player.”

Speaking to the BBC ahead of England’s opening World Cup match, Bellingham was asked who his England heroes were. “Gerrard was probably my biggest one,” he replied. “The character he has besides the football is world class and then you add on his ability and it’s a joke really.”

Bellingham was then asked what he made of the comparison with Gerrard. “Obviously, when your heroes take the time to appreciate what you’ve done it’s really special,” he replied.

“But I’m not sure how I feel because you know, it’s almost a bit disrespectful to him really, with all he’s achieved in the game, to then say that after three years we have similarities. I think I just want to be Jude and kind of go on my own path. What he did was amazing and if I can get even close to what he’s done then I’ve done well.”