Italy are the champions of Europe 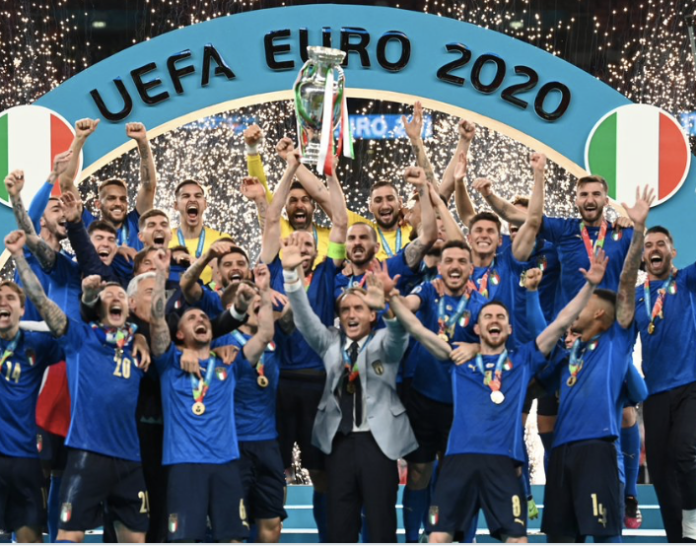 Italy beat England in a penalty shootout to win the European soccer championship on Sunday.

It was the first final to be decided on penalties since Czechoslovakia beat West Germany in 1976.

In the process, they destroyed England’s hopes of winning its first major title since the 1966 World Cup.

Manager Gareth Southgate has taken the Three Lions to their first competition final since the 1966 World Cup but it ended in heartbreak as Italy won the game on penalties.

In the penalty shootout, Harry Kane and Harry Maguire were on target for England while Pickford kept hopes alive with saves from Andrea Belotti and Jorginho.

However Italian keeper, Donnarumma served up a match-winning performance by saving kicks from Jadon Sancho and Bukayo Saka after Marcus Rashford hit a post.

Federico Bernardeschi, Leonardo Bonucci and Domenico Berardi all scored for the Italians.

Luke Shaw had given England a superb start with a goal after two minutes.

Harry Kane spread the ball wide to Kieran Trippier who sent a curling deep cross that the fast-arriving Shaw hit on the half volley to hammer home his first international goal.

Shaw’s goal was the fastest ever in a European final.

England’s well-drilled defence, which had conceded just one goal, via a Danish free kick, in their six previous tournament games, held firm.

The Italians were unable to mount meaningful attacks from the back and their helplessness was exemplified by centre back Bonucci who shot wildly from 35 metres with the last kick of the half.

In the second half, Italy started applying pressure as England slowly went on the defensive trying to protect their lead.

Pickford was called into action after 57 minutes, blocking a Lorenzo Insigne shot and then getting down to palm away Chiesa’s fierce strike.

Eventually, Leonardo Bonucci equalised for the Azzuri in the 67th minute, to become the oldest player to score in a European final.

For his efforts, Bonucci was awarded the Star of the match and Donnarumma was chosen the player of the tournament.

For most of the 67,000 Wembley crowd, this was a bitterly disappointing result since their 55 year old wait for a footballing trophy continues.