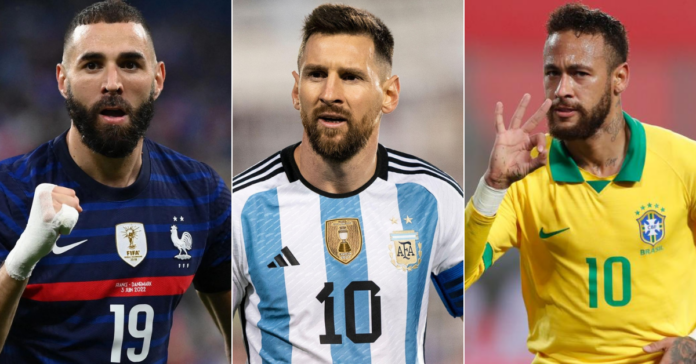 In total, 32 countries will compete for the ultimate prize on football’s grandest stage, but who are the favorites to go all the way in this year’s FIFA World Cup? Let us take a look…

Brazil is the favorite to win this year’s World Cup in Qatar FIFA World Cup . They are arguably the best team in the world right now. Brazil may not have savored World Cup glory since 2002, but they are five-time winners and currently boast strength in depth – with the likes of Neymar, Vinicius Junior, and Alisson Becker in their squad.

They finished the CONMEBOL World Cup Qualifiers as the table toppers with as many as 45 points from 17 matches, even better than Lionel Messi’s Argentina.  Brazil have made the last-eight exits in three of the four tournaments that have followed their win in Japan and South Korea but they are looking all set on paper to win this world cup.

The defending champions France are in with a chance to do something special. No team has managed to successfully defend their world champion tag since Brazil in 1962. France has a star-studded squad at their disposal too that includes Kylian Mbappe and Paul Pogba knowing what it takes to emerge victorious.

2022 Ballon D’or winner Karim Benzema is expected to return to the squad after not being included in 2018. Benzema was named the UEFA Player of the Year after leading Real Madrid to a Champions League title last season. Since its 2018 win, France has won the 2020-21 UEFA Nations League by beating Spain in the finals.

Lionel Messi’s Last Chance to win the coveted World Cup trophy, and it might just be his best opportunity as well. Argentina has a formidable squad that blends youth and experience perfectly and they haven’t lost a game since the 2019 Copa America.

In 2021, the Argentines won their first Copa América since 1993, having two years earlier set off on an unbeaten run that’s still going. It’s currently 35 games since Scaloni’s men last suffered defeat, leaving them within touching distance of Italy’s world-record sequence of 37 matches without a loss, set between 2018 and 2021.