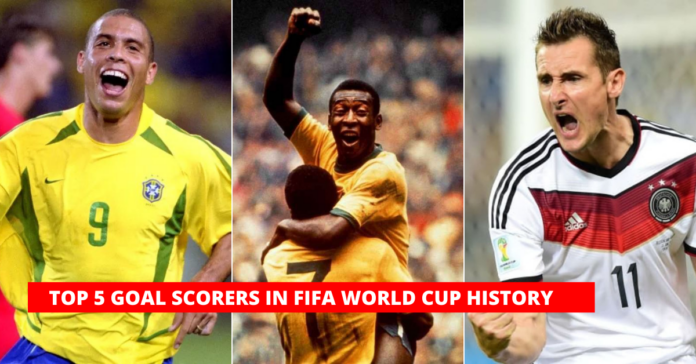 FIFA WC is set to start in two days

Scoring a goal at the FIFA World Cup is amongst the highest achievements a footballer can complete during their career.

FIFA WC 2022 is set to start in 2 days in Qatar, let’s revisit some important stats ahead of the tournament

Here are the Top 5 scorers in FIFA WC history

1. Miroslav Klose: After playing in four different FIFA World Cup editions, Germany’s Miroslav Klose currently holds the record for the most goals scored in the competition’s history. Miroslav Klose scored 16 times across 2002, 2006, 2010, and 2014 tournaments combined, at an average of 0.67 goals per game. Overall, Klose’s 16 World Cup goals came from just 63 shots – a phenomenal record of converting 25.4% of his shots across the four tournaments he played in.

3. Gerd Muller: Gerd Müller (1945–2021) was a German professional footballer who represented the West Germany national football team as a striker between 1966 and 1974. He scored his first international goal on 8 April 1967, when he netted four goals in a UEFA Euro 1968 qualifier against Albania. Since then, Müller become his country’s all-time top scorer with 68 goals in 62 games until being overtaken by Miroslav Klose on 6 June 2014. He held the record for goals scored in FIFA World Cup tournaments between 1974 and 2006. This record was bettered in 2006 by Brazil’s Ronaldo, and eight years later by fellow countryman Miroslav Klose, who also broke Müller’s record for goals for Germany.
4. Just Fontaine: Just Fontaine will best be remembered for his 1958 FIFA World Cup performance, where he scored 13 goals in just six matches – a feat that included putting four past defending champions West Germany. It was also the highest number of goals ever scored by one player at a single World Cup tournament – a record that stands today. This tally secured him the Golden Boot.
5. Pele: Pele won the Best Player award at the 1970 World Cups for scoring four goals and six assists. On 29 June 1958, Pelé became the youngest player to play in a World Cup final match at 17 years and 249 days. He scored two goals in that final as Brazil beat Sweden 5–2 in Stockholm, as revived by Garrincha He then recovered and was compelled by the victory to weep as he was being congratulated by his teammates. He finished the tournament with six goals in four matches played, tied for second place, behind record-breaker Just Fontaine, and was named best young player of the tournament
For more sports and entertainment news, follow us on Twitter and Instagram