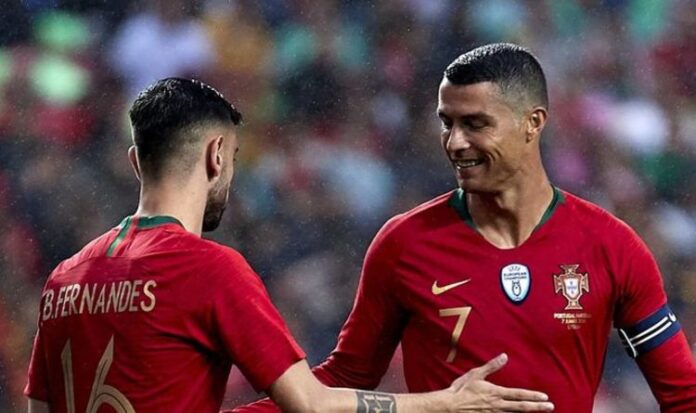 Bruno Fernandes has broken his silence

Bruno Fernandes has confirmed that he has ‘no problem’ with Manchester United teammate Cristiano Ronaldo following his explosive interview with Piers Morgan.

Ronaldo, along with Fernandes, is currently with the Portuguese national team gearing up for the start of their World Cup campaign next week.

“I didn’t read the interview so I am OK with that,” Fernandes told Sky Sports, speaking after Portugal’s 4-0 win over Nigeria in their final warm-up match ahead of the World Cup on Thursday evening. “As I said before, now is about the national team with Portugal.

“Cristiano is lucky to play in one [a World Cup] five times. This [upcoming tournament] will be his fifth time in the World Cup, so everyone is ready for that and everyone wants to give their best for the team.”

I have no problem with anyone, says Bruno

Fernandes continued: “They put the sound [on the TV] after. Did you hear it with the sound? In Portugal, we have a problem [with that].

“I was watching on one of the channels that were talking about that, saying it was ‘cold’ and ‘bad’ for 45 minutes. All of a sudden, they went on a break and the sound came on it and said that he was joking with me.

“They came back and said there was a joke, and then cut it there. If they go back they will see that there was a problem. But if they tell the truth and explain what was in that video, people will know

“As I said, this is the national team and Manchester United will be my focus after the World Cup, after December 18, because that is the final.”