Drishyam 2 reviews: The case has reopened with plenty of twists 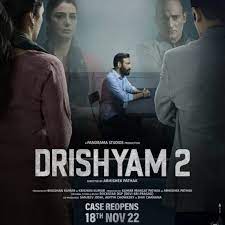 Drishyam 2 reviews are here. So here are some leading and audience reviews.

Synopsis: The Salgaonkars are still living in fear even after 7 years of that fateful night. With unexpected events and the police using everything in their power to find answers, will Vijay Salgaonkar save his family again or are they doomed?

According to their review, making a sequel as good and intriguing as the first part was is a challenge in itself and this movie has passed that challenge. The movie begins right from where the first part ended, Vijay coming out of the police station with a shovel. However, there was a witness on that night because of whom the case reopens again.

Even though 7 years have gone by and the Salgaonkars are trying to move on in life, they are always on guard and the lingering fear is constant. As the plot thickens, Vijay who had full support from his community in the first part, starts losing the same as new things come into light. The first half is a slow burner building up to the second half which in turn builds up to the intriguing climax. The movie is full of twists and turns which will keep you glued to your seats and hooked to the screen.

Akshaye Khanna as the new IG of police does his character justice and Tabu as usual finnesed her role. Rajat Arora is still the sensible father who just wants things to settle soon and then we have Gaitonde still pining for his revenge. Shriya Saran, Ishita Dutta and Mrunal Jadhav have the same roles more or less but all of them have delivered.

Overall, this one’s a successful sequel. Definitely worth a watch.

Hindustan Times in their review say that ‘Drishyam 2 ticks most of the boxes in the checklist of Bollywood audiences and makes for a great watch.’ Vijay Salagaonkar is now  a theatre owner who wants to produce his own film and has the script all set as well. His love for Bollywood movies and suspense thriller plots are what he has implemented in the last part to save his family and now that the case is reopened, the mystery will only get more interesting.

Even though the audience knows what conspired in the first part, the truth is yet to come out in the light. This movie is a direct sequel and all the references of the prequel just make the audience reminisce just how good the prequel Drishyam was. With a new IG in town (Akshaye Khanna) who is hell bent on reopening the case and most importantly find the body and finally put Vijay behind the bars, How will Vijay save his family this time? Has the time come to finally confess?

The writer who also wrote the Malayalam version of the movie is the one behind this brilliant plot which is full of twists and gasp worthy moments. The screenplay doesn’t disappoint either. Every scene is a plot in itself and you don’t know what will happen next. The tension building is done right and it delivers results. The first half is slow, the second half builds upto the last 30 mins of the movie which will leave you speechless and full of different emotions.

Drishyam 2 doesn’t disappoint and is definitely worth watching in the theatre.

Here are some audience reviews;

I generally don’t give reviews to movies, but #drishyam2 really deserves it. So here’s a appreciation tweet for the whole of Drishyam team!! 🎉 #AjayDevgn

These 3 are the pillars of DRISHYAM 2 🔥

Vaathi starring Dhanush will release on this date.