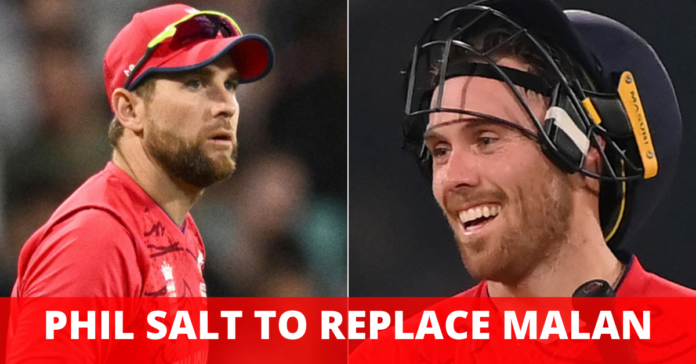 Dawid went off the field during the Sri Lankan innings and did not return to bat in England’s run chase. Vice-captain Moeen Ali said Malan’s injury doesn’t look good and according to reports Phil Salt will likely replace him in the semi-final clash against India on Thursday. Dawid Malan has scored 56 runs for England in 3 outings but his temperament and ability to stitch partnerships give the team attacking options.

“It doesn’t get bigger and better than playing India anywhere in the world because of the crowds and they are such a big side and force in cricket,” Ali said.

Phil Salt is likely to be the replacement

It remains to be seen, however, whether Salt will play at number 3, which would be the first time he would play in that role, otherwise, the Three Lions will have to demote either Jos Buttler or Alex Hales. The opening pair has started to click together, so in all likelihood, Salt will slot in at number 3.

Phil Salt was in good form when Pakistan played New Zealand in the 7-match T20I series, he scored a total of 167 runs

Four teams will now aim for the ultimate prize and that is the T20 WC 2022. New Zealand will play Pakistan in semi-final 1 at the Sydney Cricket ground, while India takes on England at the Adelaide Oval. Both matches promise a lot as all teams have superstars. There is a possibility that India take on Pakistan in the summit clash.