Why South Africa are the biggest chokers in World Cricket? 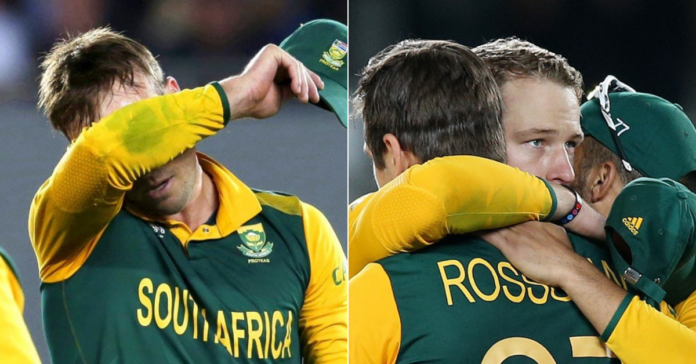 South African cricket touched a new low on Sunday after losing by 13 runs to minnows Netherlands on Sunday. South Africa just again proved why they are termed as ‘chokers’ in the ICC tournaments. Having dominated the tournament from the scratch, and even beating India with ease, the South African team lost the last two matches on the trot to get eliminated from the tournament.

The shocking loss extends South Africa’s World Cup misery, mainly in the 50-over format where the four-time semi-finalists have never reached a final. South Africa just needed a win against the Netherlands to qualify for the semi-final, and they were certainly the favorites to do so. However, things were not meant to be. The Netherlands managed to score 158 runs in the first innings, the pitch was a little slow, but it was an achievable target.

South Africa always has had one of the best teams on paper, but the fact that they have never gotten past the semi-final stage of any of the World Cups certainly proves that the team has always failed in pressure situations.

Even during the 2015 World Cup, they were considered one of the favorites, but they lost in the semi-final of the tournament against New Zealand. New Zealand eliminated South Africa in the 2011 World Cup as well. South Africa topped their group in 2011, but again got eliminated in the knockout stages.

With the last two performances in the ICC T20 World Cup 2022, it is safe to say that the Proteas have the tendency to choke under pressure conditions. They dominated the tournament but lost to the Netherlands, in the end, to get knocked out. The luck was not with them in this tournament as well, where their match against Zimbabwe got abandoned due to rain.

The “Chokers” tag will always be there, says Bavuma

“It [the chokers’ tag] will always be there until we find ourselves in a situation where we get to a final. But there are elements of learning we could take from it, especially the younger guys,” Bavuma was quoted as saying by ESPN after their loss.

“For someone like (Tristan) Stubbs or Marco Jansen, it’s for them not to make the same mistakes. Unfortunately, that tag, we are still going to carry that monkey on our backs,” the South Africa captain said.

Mark Boucher calls it the “worst collapse” in SA history

‘The more you don’t do well in World Cups, I think it does start playing with your head, that is just natural,’  Boucher told reporters.

‘Each one is an individual event,’ he said.

‘I know that there is a lot of history behind South African cricket and World Cups.

‘If you would have said to us that we have got the Netherlands to play to get into a semi-final and got to beat them, we would have taken that at the start of the tournament.”