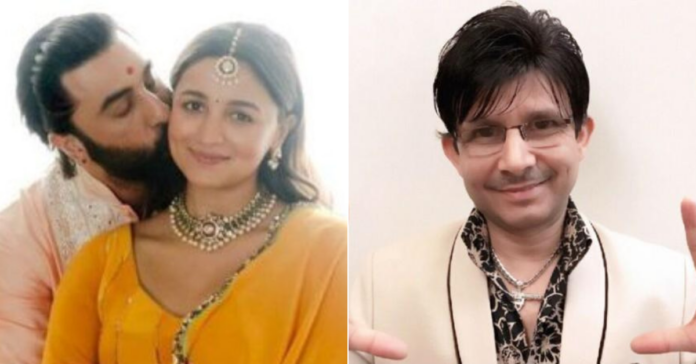 On Sunday, celebrity couple Alia Bhatt and Ranbir Kapoor welcomed a baby girl. Alia had a C-section, and both the baby and the new mother are reported to be doing well. After being in a relationship for around five years, the couple married in April of this year. KRK congratulated the couple but his tweet did not go down well with fans of Ranbir-Alia

While congratulating the Brahmastra stars, KRK mocked the couple about giving birth to a baby girl within 7 months of their marriage. He tweeted, “Congratulations to #RanbirKapoor and #AliaBhatt for becoming proud parents of a beautiful daughter within 7 months.”

One user wrote, “Teri kyu Jal Rahi hai? At least they didn’t abort the baby just for image sake, and sometimes it happens that one of the 2 partners may leave the other to save their image after hearing pregnancy news but at least they accepted it and married.”

Another netizen tweeted, “Congratulations to them…but none of our business whether it’s 7 or 9 months…u concentrate on ur children’s 6 or 9 months.”

After seeing all the tweets by the netizens, Kamaal R Khan posted yet another tweet and wrote, “I can’t understand why some idiots are giving lectures here. There are millions of children, who are born prematurely. It’s normal.”

Who is Kamaal R Khan?

Kamaal Rashid Khan is an Indian actor, producer, and writer in Hindi and Bhojpuri cinema. He has produced or written most of the films he has starred in, notably the controversial Deshdrohi (2008), his only film as a lead actor. He is best known for his supporting role in Ek Villain (2014) and for participating in the reality show Bigg Boss in 2009. He has also appeared in music videos.

Kamal R Khan has been at the center of controversies since 2005. Courts in Mumbai granted injunctions to restrict Khan from posting defamatory content against actor Salman Khan and producers Nikhil Dwivedi and Vashu Bhagnani in separate cases in 2021. He was arrested and detained in 2022 by the Mumbai Police, when returning from Dubai where he had been residing, for complaints (filed by Yuva Sena politician Rahul Kanal) on his 2020 tweets against Akshay Kumar-starrer Laxmi, a 2020 LGBT film dealing with transgender issues and tweets against director Ram Gopal Varma. After spending nine days in judicial custody, he was granted bail for the tweets and for a separate 2021 sexual molestation complaint filed by model Taashaa Hayaat.