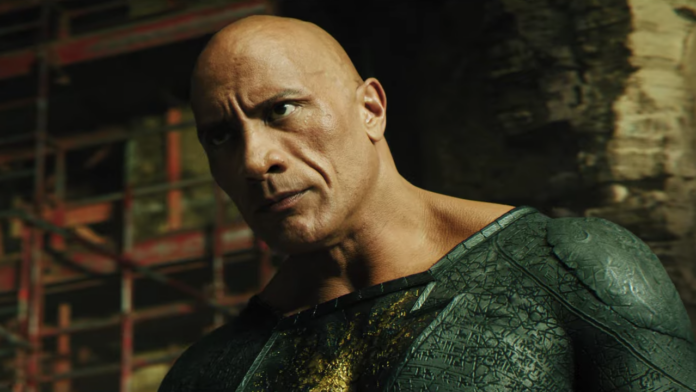 Dwayne Johnson will be seen in the titular role in Black Adam.

In the movie Black Adam, Dwayne Johnson will be featured as the title character. Fans who were excited to see DJ in action were curious after watching the trailer for the movie. DJ, Aldis Hodge as Carter Hall/Hawkman, Noah Centineo as Al Rothstein/Atom Smasher, Quintessa Swindell as Maxine Hunkel/Cyclone, Mo Amer as Karim, Pierce Brosnan as Kent Nelson/Dr. Fate, and Sarah Shahi as Adrianna were all present at the recent global press conference held by the Black Adam team.

When Dwayne was asked if there was anything in the film that reminded him of himself, he laughed off and said, “Aside from flying and able to shoot electricity out of my hands?”

DJ continued, “I would say conviction, probably, and passion he has. He does have a strong conviction, Black Adam, and he’s a pretty passionate guy about what he believes in. And it was truly an honor to play him and deliver him to the world.”

“But I also want to say and acknowledge, not only was it an honor for me to play, Black Adam, and have him come to life but it was truly an honor to make this film with this group and introduce the JSA (Justice Society of America) to the world.”

“And as many of you out there know, the JSA was the very first superhero group even before the Justice League.”

Here are the early bird reactions;

#BlackAdam is the best DCEU movie since Zack Snyder’s JL and it definitely embraces the DCEU with multiple new characters and great action sequences. Also there’s a Cameo that will have everyone talking for weeks. I can’t wait to see it again! ⭐️⭐️⭐️⭐️⭐️ pic.twitter.com/kp6oGzQbB8

I have seen #BlackAdam! This was one of my most anticipated films of the year, and it did not disappoint. The action sequences were incredible, especially the ones with the JSA. The Rock crushes it as Black Adam. The film’s end left me with high hopes for the future of the DCEU. pic.twitter.com/vd0Zy35lWT

#BlackAdam is the most fun I've had watching a DC film in theaters since BvS. The film is huge in scale, epic & that post credits Scene which we all know what it is got the biggest cheer since Endgame imo. The JSA are all fantastic & the film sets up a bright DCEU future. Love It pic.twitter.com/bbsi8tJPgH

So yesterday I had the pleasure of watching @blackadammovie thanks to @WarnerBrosUK. #BLACKADAM is a force to reckon with. True Wrestlemania of the DCEU. Bold brutal and full of action. Great Soundtrack. Loved it. #dccomics pic.twitter.com/jigsh63FSM

By the looks of it, this movie is going to hit all the right spots. It’s redemption time for DCEU.

Black Adam will be officially releasing in India on 20th October 2022.