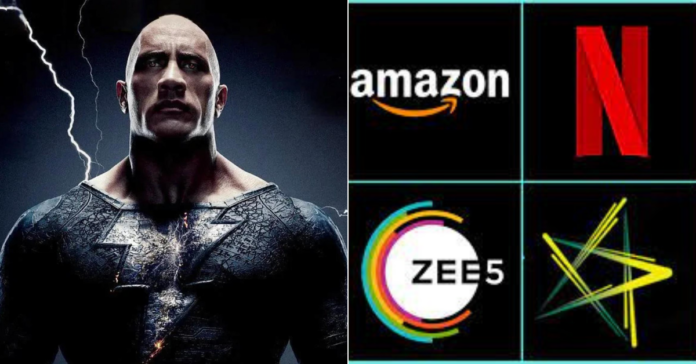 Black Adam Gets a Streaming Date

On Monday, Warner Bros. officially announced the digital and home release dates for Dwayne Johnson’s Black Adam which may not be what some were expecting.

Black Adam is set to hit digital OTT platforms on Tuesday, November 22nd, exactly one month after the film initially debuted in theaters. It will then be arriving on 4K, Blu-ray, and DVD on Tuesday, January 3rd, 2023.

According to The HD Room, Black Adam‘s physical release includes an assortment of bonus features, including featurettes like “The History of Black Adam,” “Black Adam: A New Type of Action” and “Kahndaq: Designing a Nation.” This comes just a month after Black Adam‘s successful release in theaters.

In the United States and Canada, the film was released alongside Ticket to Paradise and was projected to earn $58–68 million from 4,402 theaters in its opening weekend. The film made $26.7 million on its first day, including $7.6 million from Thursday night previews, besting the opening day of Shazam! ($20.4 million). It went on to gross $67 million during the opening weekend, the highest of Johnson’s leading career, while also ranking first at the box office.

This was also the fifth-highest October opening weekend ever for a film. In its sophomore weekend, the film dropped 59% to $27.5 million, remaining in the first position. During the third weekend, the film grossed $18.3 million a drop of 33%. In the fourth weekend, it earned $8.1 million a drop of 56%, while being displaced from the first position by Black Panther: Wakanda Forever.

What is Black Adam?

Nearly 5,000 years after he has bestowed the almighty powers of the Egyptian gods – and imprisoned just as quickly – Black Adam (Dwayne Johnson) is freed from his earthly tomb, ready to unleash his unique brand of justice on the modern world.