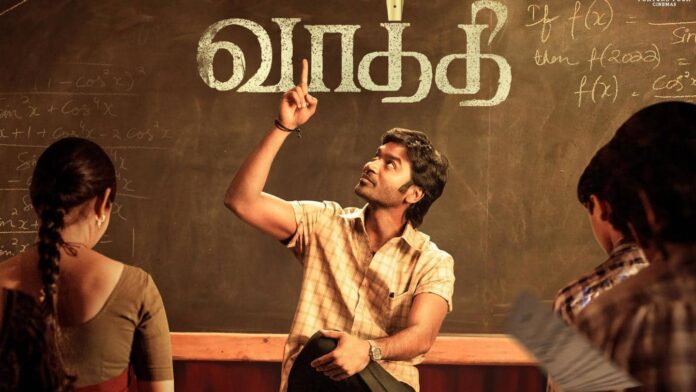 Two-time national award winner Dhanush is all set to be next seen in Sir/Vaathi, which is produced under Sithara Entertainments and Fortune Four Cinemas on a high and lavish budget. Samyuktha Menon will be starring as the female lead. The film finally got a release date today.

Sir/Vaathi will have a grand worldwide release on 2nd December 2022. Dhanush has been having a good run with his previous movie Thiruchitrambalam being a box office hit. If the teaser of Sir/Vaathi is to be believed, this one will set the box office ablaze as well.

A teaser trailer released on Dhanush’s birthday shows Dhanush in the role of a junior lecturer whose fighting against the education mafia. It also shows the value of education, exploitation of teachers, unreasonably hiked fees etc.

By the looks of the teaser, this film will be a drama with a social message which will try to make an impact on the society. Releasing the teaser, the makers wrote ‘Education is more than about books, marks and results.’

Additionally, the release date announcement poster shows Dhanush sitting on a bench with a blackboard behind him while his is pointing at the release date. See the poster below.

Sir/Vaathi will showcase the plight of a young man against the privatization of education.

Watch the teaser of Sir/Vaathi below.