Thiruchitrambalam full movie leaked online on the day of release! 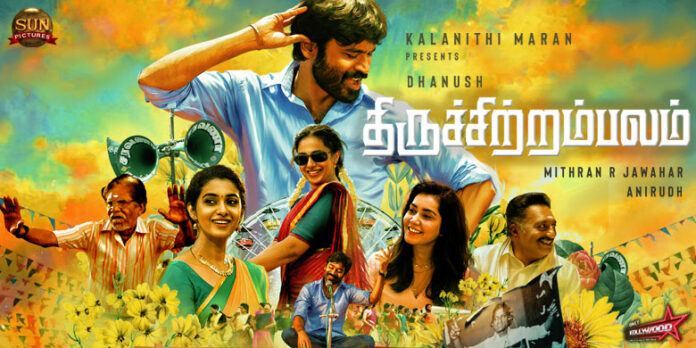 Thiruchitrambalam, starring Dhanush and Nithya Menen is all set for its theatrical release today!

Amid its release, the film became the recent victim of piracy as the full movie in HD quality leaked today itself.

Thiruchitrambalam is hitting the big screens today and it has been getting amazing reviews and is expected to do well at the box office but the movie is facing one of the biggest fears of every filmmaker and actor, Piracy. Thiruchitrambalam became prey to piracy as the full movie was leaked on websites such as Tamilrockers, Movierulz, and other sites.

The entire film industry of the country is fighting hard against piracy but often every week new releases are leaked online disrespecting the hard work of everyone in the film.

Thiruchitramabalam is being hailed as a breath of fresh air for south Indian cinemas because it’s so different from the usual genres like action, thriller, etc.

Dhanush, as usual, is praised for his performance and just how he brings the boy next door but he is middle-class act is splendid. Nithya Menen who is the leading lady is being appreciated too along with Director Mithan. R. Jawahar.

People are loving the movie and are coining it ‘The Feel Good movie of the year.’

The movie was trending all over Twitter even before its release but for the first time in a long time, for all the good reasons which included fans praising the movie and Dhanush’s acting.

2022 looks like a good year for Tamil movies. Vikram, Valimai, Don, Kaathuvaakula Rendu Kaadhal, and Rocketry have all come out with flying colors at the box office.

Everyone was focused on Thiruchitramabalam and judging by the reactions it has been receiving, the movie is fortunately expected to do good at the cinemas.

After Thiruchitrambalam, Dhanush has Naane Varuven and Vaathi (Sir in Telugu) lined up. The talented actor who is also nominated for the 67th Filmfare awards recently made his Hollywood debut with The Gray Man and he will also be seen in the sequel to the film.

True cinephiles will go and watch the movie at the cinemas so let’s see how much this piracy affects the movie.