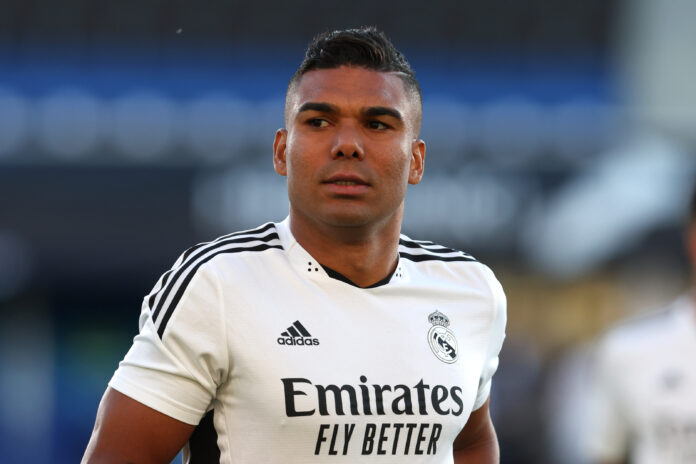 Manchester United has agreed to a £60million deal for Real Madrid midfielder Casemiro after a breakthrough in talks.

A medical is scheduled for the weekend and the Brazil international will sign a four-year contract at Old Trafford, with the option of a further year ( via Daily Mail UK )

ESPN reported earlier this week that United had cooled their interest in Adrien Rabiot over the Paris Saint-Germain midfielder’s wage demands and had turned their focus to Casemiro.

Sources told ESPN that Casemiro was not ruling out the option of leaving Madrid.

The Brazil international had initially decided not to leave Madrid with the season has already begun. However, sources have told ESPN that Casemiro is gradually changing his mind because United offers him a much higher salary than he receives at Madrid.

Casemiro is under contract with Madrid until June 2025 and has won five Champions League titles.

The player knows that United’s offer could be his last big contract, which is why his entourage has asked Madrid to listen to United’s approach and expect the Spanish giants to accept Casemiro’s decision.

During Madrid’s league title celebrations in April, ESPN reported that Casemiro was considering ending his time at Madrid, having received interest from several clubs. During the summer tour in the United States, Ancelotti assured Casemiro that he was ahead of Tchouameni in the pecking order.

Real Madrid has been linked with a move for Newcastle United’s Brazil international Bruno Guimaraes as a potential replacement for Casemiro, however, sources have told ESPN Brasil that Newcastle has no intention of selling the midfielder. ( Source: ESPN Football )

The move for Casemiro was originally described as a “long shot” by Manchester United insiders – but such has been the rapid progress this week that there is now strong belief he will head to Old Trafford.

Casemiro is said to be keen on a move to the club after seeing Real Madrid sign Aurelien Tchouameni this summer – an implicit message that his days at the Santiago Bernabeu may be numbered.

The 30-year-old has won everything with the Spanish giants and is believed to be relishing a new challenge in the Premier League.

Real Madrid is also said to accept his desire to leave.

As things stand, sources have confirmed to GOAL that the midfielder is weighing up the positives and negatives of a potential move to Old Trafford.

On one hand, Man Utd would offer him a new challenge in his career while, on the other, that challenge would not come with Champions League football.

The Brazilian, though, doesn’t want to mull over the decision for too long as a final decision is expected soon. ( Excerpts from GOAL.com)

Speaking on Spanish TV channel El Chiringuito about the dinner, Aguirre said: ‘Everything indicates that it was a farewell.’

If his move to Manchester United is completed, he will be the highest earned in the Man United team with the exception of Cristiano Ronaldo