“It Was 100% Fake Fielding by Kohli”, says ex-Indian cricketer 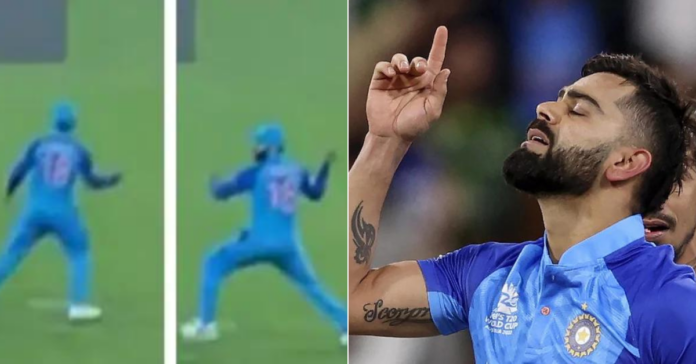 Bangladesh was not happy with Virat Kohli’s ‘fake fielding’

‘Fake fielding’ that’s the latest to keep Virat Kohli in the news. Of course, he is the current leading run-scorer of the T20 World Cup and was India’s top-scorer against Bangladesh

In the second ball of the 7th over of the Bangladesh chase, India pacer Arshdeep Singh collected the ball in the deep and threw it toward keeper Dinesh Karthik as Bangladesh openers Litton Das and Nazmul Hasan Shanto attempted a couple. In between all this, Kohli, who had no role in the action, gestured of collecting the ball and throwing it when the ball was not even near him

“The basic premise of the law is that if the on-field umpire feels that you have tried to deceive the batters (by faking a throw or a dive or any other action when the ball is not near you) now whether they have been actually deceived or not doesn’t matter. It will result in five penalty runs. If that five penalty runs were given, the two that the Bangladesh pair ran, would have still have been counted, the ball would have been dead and Bangladesh would have gotten to choose who takes strike in the next ball. So the consequences are huge, the penalty for fake fielding is incredible.” Chopra said

“Now what happened in this case? The on-field umpire didn’t see. It completely went unnoticed. If no one has seen it then you can’t charge it. The law says that the umpires need to notice it and judge it. Maybe the third umpire, if it’s in jurisdiction, can also intervene.

“Woh fake fielding tha, 100% tha, wo jo throw marne ka prayas kia wo agar umpire dekhte toh 5 run ki pentaly padti humko aur 5 run se hum match bhi jeete. (Yes that 100% fake fielding because of the way he attempted to throw the ball. If the umpires had seen it then we would’ve been slapped with a five-run penalty and we’ve won by five runs only.) So we escaped here but next time if someone does this then the umpires will have to be more careful. So are Bangladesh right? Yes, they are but nobody noticed it then so can’t do anything now,” Chopra said on his YouTube channel.