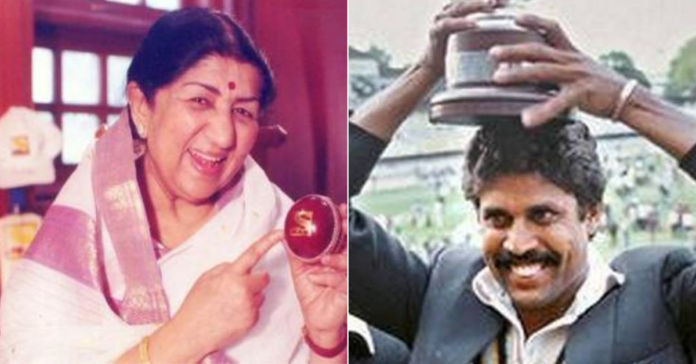 Lata didi would often go out of her way to congratulate the Indian team and players. She was a passionate cricket fan and shared an emotional relationship with a fellow Bharat Ratna Sachin Tendulkar, who referred to her as “Aai”

Ratnakar Shetty, who has been involved in cricket administration in various capacities for more than four decades, recalled a couple of such instances while paying his tribute to the Bharat Ratna.

“I can never forget that as soon as India sealed the series in Rawalpindi, the first call I received from India was from Lata Didi and she was as excited and joyous as any other Indian. She asked me to pass her congratulatory messages to all the boys,” Mr. Shetty had told The Hindu

In 2005 again during Pakistan’s return tour in India, Lata Mangeshkar was with the team all the way. “She called and told me the match was over (it was a draw) and asked me for Dhoni’s number, then told me to call him and tell him she wants to speak with him. She used to be literally thrilled whenever the team or any individual did well,” Mr. Shetty recalled.

After Kapil Dev and his team beat the mighty West Indies in the finals of the World Cup in 1983, the Board of Control for Cricket in India wanted to felicitate and honor the team. However, the cricket board did not have enough funds for it. It was then that cricket administrator Raj Singh Dungarpur turned to Lata for help.

Union minister NKP Salve, who was President of BCCI then, revealed that in Dungarpur’s biography, “Raj Singh came up with a brilliant idea of requesting Lata Mangeshkar to do a musical program in Delhi to raise money for the purpose, as the BCCI was not flush with funds in those days.”

In an old interview with a radio station, Lata recounted the incident. “I said I will definitely do it. I reached Delhi on 17th August and I did a special show. Suresh Wadekar and Nitin Mukesh, son of Mukesh Bhaiya also supported in this show. Rajiv Gandhi was also present in that show,” she said.

The concert ended up raising ₹20 lakhs, a princely sum in 1983, and enough for every player to receive ₹one lakh. And for her part, Lata did not charge a penny for the performance.

Born on September 28, 1929, she began her career in the year 1942 at the age of 13. In a career spanning over seven decades, the melody queen recorded songs for over a thousand Hindi films. She had sung songs in over thirty-six regional Indian languages and foreign languages.

In 2001, in recognition of her contributions to the nation, she was awarded the Bharat Ratna, India’s highest civilian honor, and is only the second vocalist, after MS Subbulakshmi, to receive this honor.

She’s also the recipient of three National Film Awards among many other honors she received during the span of her career. ‘Aye Mere Vatan Ke Logon’, ‘Babul Pyare’, and Lag Ja Gale Se Phir’ among others are some of her iconic songs.