Koffee with Karan’s new episode is full of surprises 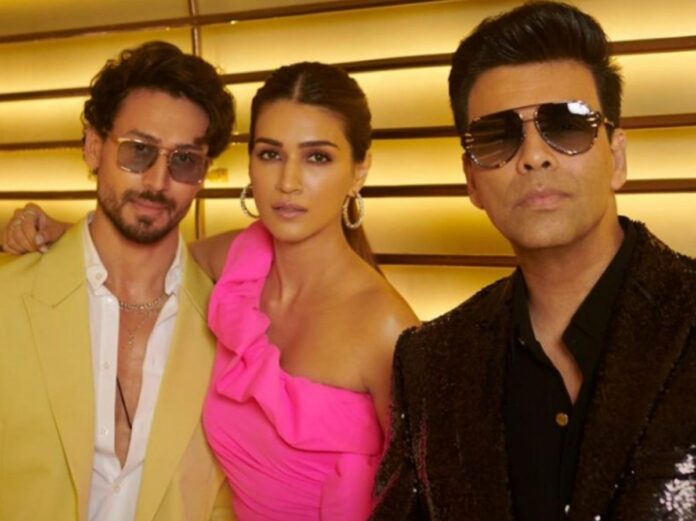 This season of Koffee with Karan is full of surprises, and excitement and if we may add has a hint of raunchy too!

The latest guests to grace the iconic couch were Heropanti co-stars, Kriti Sanon and Tiger Shroff.

Kriti and Tiger both made their debut with Heropanti in 2014. Since then, this is the first time they came together and at the same time, this also marks their first time on the couch both together and individually.

The episode showed how zingy and witty both Kriti and tiger are as well as made some juicy revelations.

Kriti revealed during the shoot days of Heropanti, there was a scene where he had to peck Kriti on her cheek for which Tiger was trembling all over much to Tiger’s dismay.

Tiger accepts he has ‘Zero game’

At the beginning of the episode itself, Karan Johar asked why didn’t Tiger and Kriti date right after their movie like most co-stars do and asked Tiger, “Do you have no game?” to which Tiger very gently said, “I have Zero game.”

Tiger confesses he is jealous of Ranveer Singh

Karan Johar asked one thing he would envy Ranveer Singh for and Tiger said, “His wife, she’s very pretty.” making Kriti and Karan laugh out loud.

Just like any other episode, KJO was boasting about his couch being a manifestation couch to which Kriti Sanon said how she would look opposite Aditya Roy Kapoor.

KJO agreed to this and added how he had spotted the duo “canoodling in the corner” at his party.

Kriti replied, “We do look good together but you know me, I don’t canoodle in a corner! But yes, we were talking and he is a fun guy to be around.”

She further added,  “I feel like he is a really nice guy. He is good looking. And we chat sometimes whenever we sort of bump into each other. There’s not been anything else.”

Kriti calling Prabhas for a segment of the show

In the popular segment, ‘Hey Karan its me’ wherein the people gracing the couch have to call someone from the film fraternity and make them say ‘Hey Karan, its me!’, Kriti Sanon called her Adipurush co-star Prabhas, who was a good sport with all smiles for his co-star and he said “Hey Karan its me! ” in the most adorable way.

Koffee with Karan season 7 is on its way to becoming one of the best seasons of the show with its exciting guest pairs and their equally exciting revelations.

Do you feel this is the best season of Koffee with Karan so far?

Are you an SRK fan and have been wanting to see him on the big screen for a long time? Read here now.