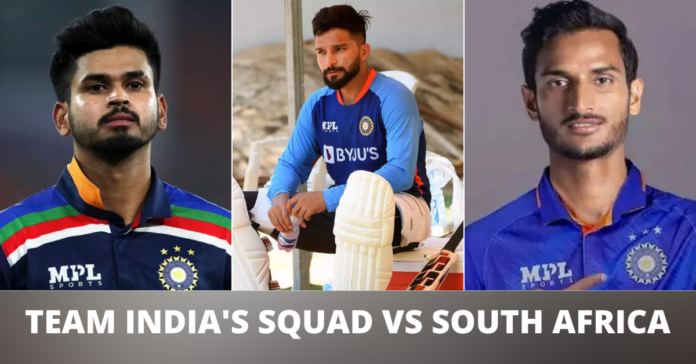 While South Africa has announced the squad for both the T20Is and the ODIs, India is yet to announce the ODI squad. As for the T20Is, the Indian team will be led by Rohit Sharma, whereas Temba Bavuma will be in charge of South Africa

India’s T20 team will be in full strength as they look to prepare themselves before the T20 World Cup.

India’s batting all-rounder Deepak Hooda will not be available for the three-match T20I series due to back spasms, the national selection committee is set to recall middle-order batter Shreyas Iyer for the South Africa series.

Yet to recover from COVID-19, Mohammed Shami has been ruled out of India’s three-match T20I series against South Africa.

The Indian team will be without Bhuvaneshwar Kumar and Hardik Pandya as they both have been rested for the South Africa series and will be reporting to the NCA for conditioning-related work. Left-arm spinner Shahbaz Ahmed will come in place of Hardik Pandya

However, when asked why Shahbaz has been picked in place of Pandya, the source said, “Is there any seam bowling all-rounder, who can replace Hardik? Raj Bawa is too raw and that’s why we kept him in India A for exposure. He will need time to blossom. Tell me another name?” Meanwhile, Hanuma Vihari will lead the Rest of India’s team in the Irani Cup against Saurashtra.”

Where can I watch India vs South series LIVE in India?

India vs South Africa T20I and ODI series will be LIVE on Star Sports Network.

How can I watch the Live Streaming of the India vs South Africa series in India?

India vs South Africa T20I and ODI series will be available for Live Streaming on the Disney+ Hotstar website and app.