Ram Setu vs Thank God battle at the box office! Who will win? 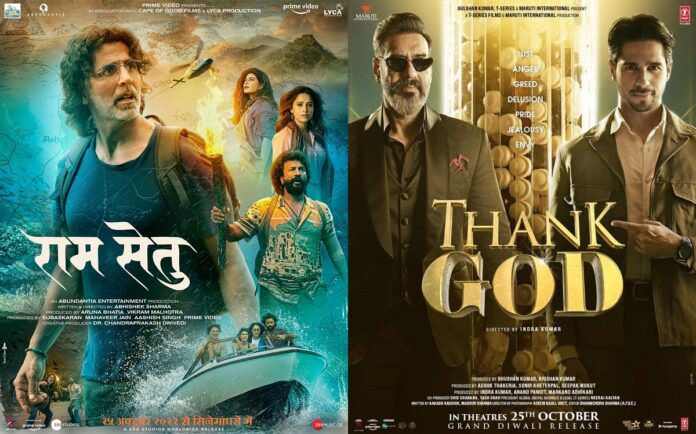 Fans are waiting to see which film Akshay Kumar‘s Ram Setu or Siddharth Malhotra‘s Thank God marches ahead in terms of both content and commerce. Akshay Kumar thinks otherwise, as per his recent interview with Hindustan Times. He says, “There is no clash. Let’s not refer to it as that. They are two films, with different appeals, releasing on the same day. It’s happened in the past and it will happen in the future. Fans will choose to watch the one that appeals to them the most or better still, watch both. The main objective is for our fans to enjoy the festival at the movies with friends and family.”

Talking about the plot of the Abhishek Sharma directorial, Kumar opines, “Ram Setu is very proudly rooted in Indian history and culture. On the factual side, the team has relied on deep research to represent what is true and bring out several unknown facts. On the spiritual, sentimental side, we have not only remained emotionally respectful, but I can assure you that the values and beliefs associated with Shri Ram and Ram Setu are being uniquely upheld

According to Hindustan Times, Ram Setu is enjoyable. It is in parts slick and in other parts, quite thrilling. The credit for that goes to a good story backed by some of the best background score used in a Hindi film this year. The VFX and CGI are questionable indeed, as the trailer had indicated. The scenes with the diving suit are cartoonish, almost. But what makes up for that is the stunning underwater sequences. The way director Abhishek Sharma has captured the beauty and grandeur of Ram Setu under the Indian Ocean is reminiscent of BBC Earth’s Blue Planet documentary.

One of the worst movies in recent times

Poorly written, shoddily mounted and badly acted, Ram Setu is pure, self-serving and hysterical drivel that rides on the back of a Bollywood star who enjoys undisputed monopoly on the genre. There is absolutely nothing new here except for the fact that Akshay Kumar sports a studiedly professorial look that could be regarded as a departure from norm. That apart, he starts off spouting surprisingly provocative lines that go against type.

“Dharm sirf todta hai, sanskriti jodta hai (Religion divides, culture unites),” he says in one early scene. Worthy of applause? Well, it is easy to predict that all this is going to be too good to be true. Ram Setu is constructed around half-baked theories about India’s past and present that sound more like ill-informed pronouncements of a vote-seeking politician than considered inferences of pundits who know what they are talking about.

It is a film about a floating stone but has no clue how to stay afloat. Avoidable even if you are an Akshay Kumar fan.

Ram Setu is witnessing morning occupancy in the range of 17-22%. Thank God, on the other hand, is doing around 18% on Day 1.