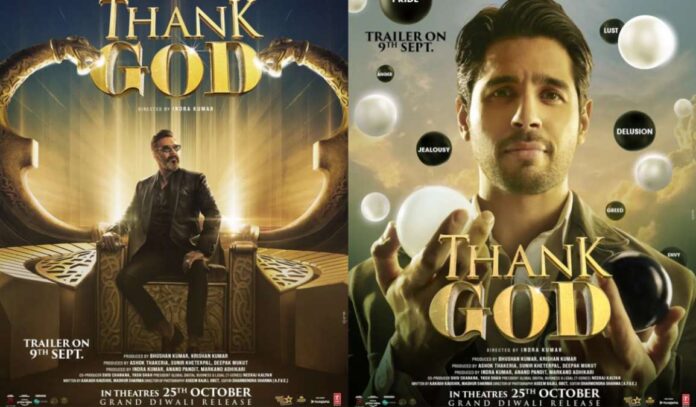 The teaser for Thank God was launched a while back but its the latest-just-released-yesterday posters that have garnered curiosity amongst the audience.

Thank God is the first time that Sidharth Malhotra and Ajay Devgn will be coming together for a project.

Directed by Indra Kumar, Thank God will have an innovative story about a common man played by Sidharth Malhotra challenging the ‘Bookkeeper’ of heaven, ChitraGupt played by Ajay Devgn. The film also has Rakul Preet Singh playing an integral role.

In an exclusive interview with Bollywood Hungama, Rakul Preet said that Thank God is a movie wherein “MunnaBhai MBBS meets Oh My God!”. The trailer shows the film to be a dramedy with a social message. It also tries to explore themes like good karma, Bad karma, what is the difference between sins and good deeds etc.

The trailer releases today on 9th September itself but the makers have made no comments about whether or not the trailer will be shown in cinemas according to Bollywood Hungama.

Strategically, the trailer for the movie is released a month before the actual release of the film to give the audience a premise of the film and at the same time make them curious to watch the movie as soon as it hit theatres.

This will be one of those RARE movies which will be released on a Tuesday on 25th October instead of the traditional Friday. Check out the trailer for Thank God below.