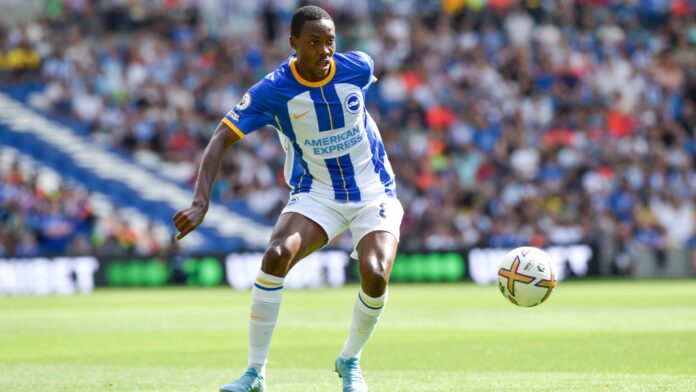 Midfielder Enock Mwepu had been forced to retire from football following the discovery of a hereditary heart condition.

Enock Mwepu, a 24-year-old midfielder for Brighton & Hove Albion, has been forced to retire from football after learning that he had a hereditary cardiac ailment, which has devastated football fans around the world.

Mwepu, who led Zambia’s national team, is well-known along the south coast. Since joining the Seagulls from Red Bull Salzburg last summer, he has made 27 appearances, including six so far this year.

Enock Mwepu has been forced to end his playing career following the diagnosis of a hereditary heart condition.

Brighton confirmed the news in a statement, “Enock Mwepu has been forced to end his playing career following the diagnosis of a hereditary heart condition.”

“The condition, which can worsen over time, would put Enock at an extremely high risk of suffering a potentially fatal cardiac event, if he were to continue playing competitive football,” the statement added.

“Enock was taken ill while on a flight to join up with Zambia during the international break and after a period in hospital in Mali he returned to Brighton to undergo further cardiac tests and ongoing care,” the statement further said.

“These tests have concluded that his illness is due to a hereditary cardiac condition, which manifests later in life and was not previously evident on regular cardiac screening. Sadly this can be exacerbated by playing sport so Enock has been advised that the only option, for the sake of his own safety, is for him to stop playing football,” the statement concluded.

Meanwhile, Brighton’s chairman Tony Bloom said, “We are all absolutely devastated for Enock. He and his family have had a traumatic few weeks and while we are just thankful he has come through that period, he has seen such a promising career cut short at such a young age. As a club we will give him all the love, help and support we possibly can to make a full recovery, and then as he decides on the next steps in his life.”

Brighton’s new coach Roberto De Zerbi added, “I am so sorry for Enock. Before I arrived I looked at all the squad, and he was a player I was so excited and looking forward to working with. We will do everything we can to help him.”

Football fans have been heartbroken by the horrific news, and many have expressed their sorrow on Twitter.

Only 24, that is absolutely heartbreaking. Was a very decent player as well, remember the stunner against us and how well he took it.

Man this is absolutely heartbreaking.

At least he's okay though and saved from the worst case scenario. https://t.co/zro8YmbbZW

Man this is so heartbreaking, I hope he has a good support system around him 🙏🏽 https://t.co/raXPoPzaCt