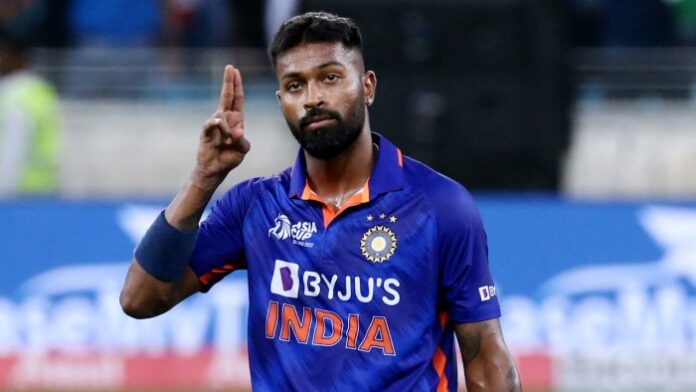 Hardik Pandya once showed us why he is one of the best all-rounders in the world.

The most awaited match between India and Pakistan in Asia Cup 2022 opener took place at the Dubai International Stadium on Sunday.

After a decent bowling performance by Team India, Pakistan set up a target of 148 runs.

The Indian chase started off on a tricky note as KL Rahul got out on a first-ball duck and Rohit Sharma struggled to get going.

The review came to his rescue, Virat Kohli also had a great escape as he was dropped on a score of 0

All eyes were on Virat Kohli as he came out to bat with thunderous applause from the crowd.

After Rohit’s wicket, a well-set Virat Kohli was also dismissed as India reeled at 53/3.

Suryakumar Yadav and Ravindra Jadeja stitched together a decent partnership

Heading into the final over, India required seven runs off the last over with spinner Mohammad Nawaz bowling

He dismissed Ravindra Jadeja for 35 off 29 in the very first ball before finisher Dinesh Karthik walked in.

Nawaz went for a quicker delivery down the leg side and Karthik swept hard towards the backward square leg to grab a single and put a well-set Hardik on strike.

Hardik Pandya eventually wrapped up the chase in style

After his dismissal, came the man of the moment Hardik Pandya, who finished off in style with a six to Mohammad Nawaz as India won the thriller against Pakistan

He remained not out on 33 off 17 balls including four fours and a six.

With 6 runs needed off the last 3 balls, Pandya in his famous swag style scored an incredible six to help India beat Pakistan in the last over

What a turnaround it has been for Hardik Pandya. Last year on this same ground he has stretchered off the field.

He could not bowl and be out of touch with the bat which hurt Team India in the 2021 World Cup games.

But his all-around heroics yesterday proved to be the game changer for Team India.

He picked three wickets with the ball which included the key dismissals of Rizwan, Iftikhar Ahmed, and Khushdil

Hardik Pandya says staying calm under pressure is the key

“You always plan over-by-over. I always knew that there is one young bowler and also one left-arm spinner.”

“In a situation like this, I know the bowler is under more pressure than me in the 20th over while bowling to me.”

“I try to keep things simple. It’s not my ego. Just the confidence I have,”

“In bowling, it’s important to assess the situations and use your weapons.

“For me, bowling short and hard lengths have been my strengths.”

It’s about using them well and asking the right questions to make the batters commit a mistake,” he added on his bowling performance

One of the best all-rounders in the game, and his form will be vital for India in upcoming tournaments.