Urvashi Rautela cheers for India but Rishabh Pant was not playing 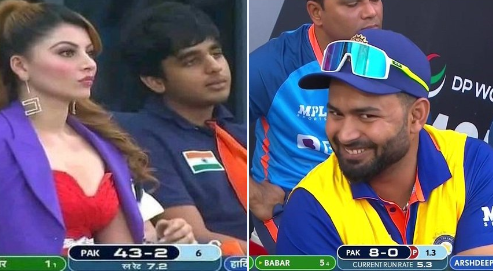 Urvashi Rautela was spotted cheering on the Indian cricket team in the stadium yesterday.

With the two teams competing in a high-octane clash, it was Indian actress Urvashi Rautela’s presence that caught the eyes of everyone.

The actress was quickly spotted on TV by netizens, who quickly tweeted glimpses of her

Recently, Urvashi and Rishabh took jibes at each other on social media, without explicitly mentioning anyone though

Urvashi said this in her interview with Bollywood Hungama.

I had to get ready. Mr. RP came, he sat in the lobby and waited for me, he wanted to meet. Main itni tired the, main so gayi.

“I didn’t realize that I had received so many calls,” Urvashi said in her interview with Bollywood Hungama.

“Out of respect, because a lot of girls don’t care about making someone wait. Out of that show of respect”

“I said we will meet when you will come to Mumbai.” She concluded.

Rishabh Pant in his deleted Instagram story wrote in his reply ” “It’s funny how people lie in interviews just for some meager popularity and for hitting the headlines.”

“Sad how some people are so thirsty for fame and name. May God bless them.” “#Mera picha chordo behen #jhutkibhilimithotihai.”

According to various media reports, the duo had dated each other for a while in the past.

Rautela was also present at the Dubai International Stadium when the two teams faced each other in the 2021 T20 World Cup year.

Talking about Pant, he was not picked in the playing XI in a surprising move as Dinesh Karthik was selected as India’s designated wicket-keeper

Rishabh pant when he see urvashi rautela in stadium pic.twitter.com/tIgZ3SUyrS

Only person having evil laugh after seeing urvashi rautela in the stadium#INDvPAK pic.twitter.com/MDfylgxivC