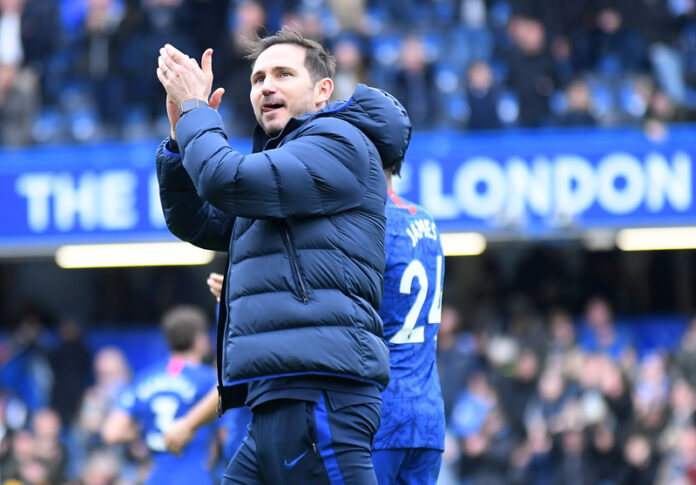 Everton find themselves in a relegation dogfight with eleven matches to play in the Premier League.

The Toffees have been on a downward spiral over the last few decades; they are no longer the giants they used to be back in the 80s.

But, they have been everpresent in the Premier League and did not go down from the English top-flight in 68 years.

Championship football would be a new level of low for the Merseyside outfit.

But is Lampard’s fault?

Frank Lampard took charge of the club on January 31 but failed to turn their fortune.

Since taking over, he has overseen ten matches across all competitions and won four games.

The 1-0 victory over Newcastle United last week was only his second win as an Everton manager in the Premier League.

Everton sit 17th on the Premier League table at the moment.

They have two games in hand on Watford, who occupy the first spot of the relegation zone in 18th, and are three points ahead of the Hornets.

That said, the upcoming fixtures are unmerciful for Everton, with trips to Liverpool, Arsenal, West Ham, and Leicester are yet to come.

So, the possibility of Watford leapfrogging Everton is not considerably low.

Lampard has had no time

Does Frank Lampard deserve the blame for Everton’s present situation?

It’s been barely two months since he has taken over at the club.

The team is not doing any better than it did under Rafa Benitez.

So, why shouldn’t Everton fans hold Lampard culpable for their miseries?

First of all, Everton pulled the plug on Benitez too late.

Lampard joined the club on the deadline day of the winter transfer window.

He did not have much time to make signings. He did bring in Dele Alli and Donny Van De Beek. Both of them have been below par until now, but you have to cut Lampard some slack since they were last-minute signings.

Everton’s 21/22 Premier League campaign has been marred with injuries. Dominic Calvert-Lewin is yet to recover his goalscoring form after returning from a lengthy ankle injury layoff.

Key players Richarlison, Andre Gomes, and Yerri Mina have also missed a lot of games because of injuries.

The defence has been the Achilles Heel for Everton this season.

Rafa Benitez set up his team with a conservative approach, yet Everton were shipping a large number of goals regularly, which ultimately led to his dismissal.

During his Chelsea tenure, we have seen Frank Lampard implementing a more attacking brand of football, which is a bizarre fit for a team flirting with relegation.

Everton needed to go for someone who could steady the ship by fixing the defence.

A great job at Chelsea

Frank Lampard guided Chelsea to the top four in his first season at Stamford Bridge.

It was a remarkable feat since the Blues were going through a transfer ban, and they did not get to replace the talismanic Eden Hazard, who had left for Real Madrid the previous summer.

But, Lampard did it mostly by outscoring the opponents. Chelsea conceded 54 goals that season, the highest among teams finishing in the top 10.

Rafa Benitez was a misfit for Everton, not only for his Liverpool legacy but also for the type of players Everton had in their squad.

A solid argument could be made that Everton could have had a better start to the season if they had a more lively style of play. So, appointing Lampard before the season had begun would have made more sense.

Everton’s present situation is a culmination of poor management and administrative decisions over the past few years.

Frank Lampard came in too late to reverse the situation. So even if Everton fail to escape the drop, Lampard should not be the one brought under scrutiny.

As the man said himself, he doesn’t have a ‘’magic wand to wave’’ and make Everton’s problems disappear overnight.