Double XL with Huma Qureshi and Sonakshi Sinha teaser out! 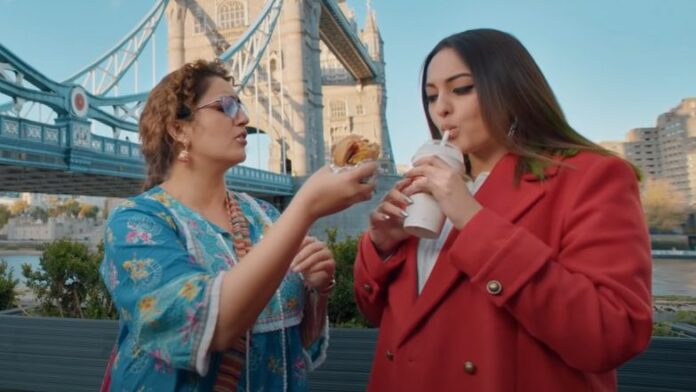 The 30 seconds teaser gave the audience a glimpse of both the protagonists looks and their bond. The teaser is being appreciated and now the audience is eagerly waiting for the movie to hit theatres.

The teaser shows Huma Qureshi and Sonakshi Sinha sitting on a bench when Huma irritably jokes about the ability of people to fat shame a woman even when she is wearing an oversized kurta. In a Thick Bihari accent, she continues by saying “No matter how much you tuck your tummy in, jeans always get stuck around the thighs.”

To this Sonakshi in her signature Haryanvi swag says, “And boys’ demands are weird. They want a big bust and a small waist.” After taking a small pause, she continues rather angrily “Tumse kuch chhota-bada maang liya to kahan jaaoge tum (What if we ask you for something big or small)” addressing men. The friends are then shown sharing a laugh.

The post expresses the movie as “a story of friendship and dreams filled with masti (fun)”.

Along with Huma and Sonakshi the film also has Zaheer Iqbal and Mahat Raghavendra. Speaking in an interview with IndiaToday, Zaheer has stated, “Sonu and Huma did their diet as they were supposed to put on weight. They put on 15-20 kg for the film. So they were just eating and eating. It was basically action, cut and burger lao (bring food). That’s all I remember from the shoot.”

Directed by Satramm Ramani, the film is produced by Bhushan Kumar, Krishan Kumar, Vipul D Shah, Rajesh Bahl and Ashwin Varde, Saqib Saleem, Huma Qureshi and Mudassar Aziz. It is scheduled to be released on October 14.

Waiting on reviews before watching Chup? Read all you need to know.