Chup: Revenge of the Artist reviews 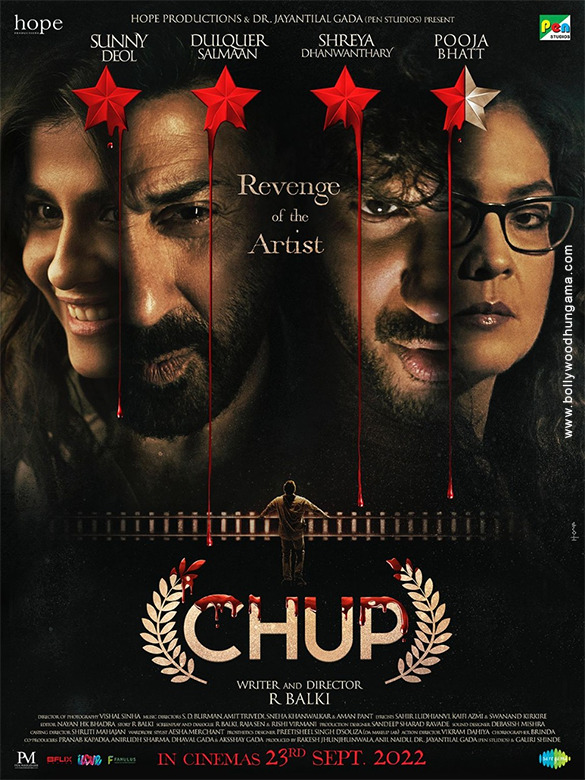 Chup: Revenge of the artist is a psychological crime thriller written and directed by R Balki, starring Sunny Deol and Dulquer Salmaan.

The early bird reviews are in for Chup: Revenge of the artist and all we can say is, the movie did well.

Times of India gives the movie 3 stars out of 5. At first glance, the movie shows promise because it has a ‘virgin plot’ since a trope where critics are murdered for reviewing has never been experimented with. Dulquer Salmaan nails the role as a lonely lovelorn florist and Sunny Deol’s comeback hits all the right notes. Dulquer’s love story with Shreya Dhanwanthary gets lost in the middle because of all the story building in the first half which is done flawlessly. Although, the big reveal in the second half makes it worth it. The ode to Gurudutt is described as ‘Hauntingly Beautiful’

News18 gives Chup: Revenge of the Artist 2 stars out of 5. The reason is that even though the film builds intrigue and suspense in the first half, the second half, unfortunately, fizzles out. There are enough clues to figure out who the killer is and since the movie relies on the big reveal, in the end, it has very less impact. But Dulquer Salmaan delivers and this could be counted as his career-best performance-wise. Sunny Deol plays the role of the righteous cop just as he should. Is the film watchable? Definitely.

BollywoodLife gives Chup: Revenge of the Artist 3.5 stars out of 5. Dulquer Salmaan’s performance is off the charts. Maybe even the best performance of the year and he is on a hot streak this year. Shreya Dhanwathary has done what she could. Sunny Deol makes a good cop but is slightly overshadowed by Pooja Bhatt who plays a criminal psychologist. The ode to Gurudutt is phenomenal. The cinematoraphy will make you fall in love with Mumbai all over again. 100% watch worthy.

Koimoi gives Chup: Revenge of the Artist 3.5 stars out of 5 as well. Since this movie explores an previously unexplored idea, you definitely should watch this movie as its a fresh perspective of storytelling in this generation of remakes. Dulquer Salmaan takes the cake with his ground breaking perfomance. The music and cinematography of the movie play supporting roles, that’s how good it is. Are there minor faults? Obvious cues? Yes. But you need to watch this movie in the cinemas. For the ode to Gurudutt at least.

Judging by these reviews, do catch this movie in the cinemas. Chup: Revenge of the Artist releases tomorrow on 23rd September.

Here’s what Sonam Kapoor and Anand Ahuja named their son.