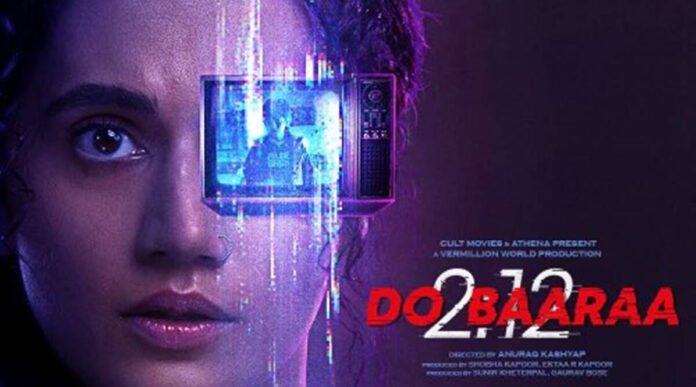 The movie is running in cinemas from today but how will it fare at the box office is a gamble since #BoycottDobaaraa is trending on Twitter for the last couple of days.

Reviews for the movie are out and all we can say is that the movie is neither here nor there. It is receiving mixed reviews with a lot of people feeling that the movie fizzles out in the second half and is hardly Anurag Kashyap’s best work.

Pinkvilla rates the film 2 out of 5 stars and states in its review that the movie builds up intrigue in the first half but does not continue the same in the second half. The second half is just confusing and does not do justice to the story. Although Taapsee Pannu is a treat to watch along with Pavail Gulati, their good acting wasn’t enough to save the film. Read the full review here.

NDTV in its review gave the film 3 out of 5 stars and also adds that the movie is intriguing enough to keep the audience hooked or invested in the movie. The review further states how this movie is more than a murder mystery and that it has a complex, not necessarily deep plot that explores a lot of turmoil that humans face at the hand of uncertainty especially when you are stuck in a time loop and are having a hard time getting a grasp on everything that is happening around you. Taapsee Pannu’s performance is the one to lookout for as she makes her character all the more believable. Read the full review here.

Bollywood life gave the film 2.5 out of stars and has praises for Taapsee Pannu in its review but does not think this movie is Anurag Kashyap at his best. The review spells out the editing errors that the director could have avoided to deliver an otherwise good film. As a movie in the thriller suspense genre, it keeps you on the edge but also becomes predictable mostly in the second half. Read the full review here.

DNA, on the other hand is all praises for the film as well as has only positive things to say about Taapsee’s performance and Anurag’s direction. Their review is asking viewers to give this movie a chance and catch it in cinemas because it is on its way to become one of those movies which get recognized and appreciated years later. Since people have been wanting Bollywood to stop making movies with storylines suited for 1980s, this movie is a breath of fresh air and now that its here we as the viewers should appreciate the absorbing plot and storytelling as sci-fi thrillers in Bollywood and good ones especially are hard to find. They give a full 5 out of 5 stars for the movie. Read the full review here.

Mixed reviews usually make the audience curious about the film and that is mostly good as more people try to watch it in cinemas. But ever since Anurag and Taapsee openly asked people to boycott their movie, their wishes have come true and #BoycottDobaaraa is trending on Twitter. Will the movie at least break even? Here’s hoping it does.

Will you watch the movie at the cinemas or from your couch on OTT?