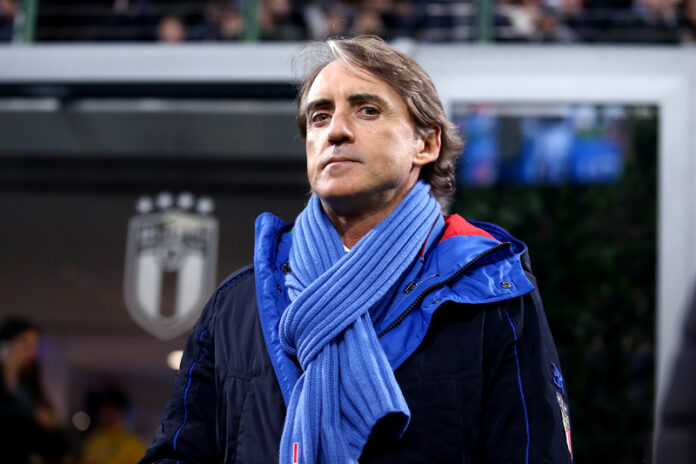 Italy crashed out of the World Cup play-offs suffering a surprising 1-0 defeat to North Macedonia.

The Azzurri emerged as one of the potential title contenders for Qatar 2022 after their heroic Euro 2020 triumph.

But in less than ten months after enjoying a glorious night at Wembley, Italy saw the other side of the coin as they missed out on their second World Cup in a row.

After such a catastrophe, the manager’s head is usually the first to roll. Not qualifying for football’s showpiece event is a massive failure for a team like Italy, who have four world titles to their name.

Will Roberto Mancini face the music?

Italian football governance body FIGC had tied down Mancini till 2026.

But did he bank enough credit to retain his job?

Italy did not lose a single match in the qualifiers before the play-offs.

But, they dropped points in four out of their eight games.

Draws against Switzerland, who won the group, were particularly damaging.

This is even more unbearable because they missed penalties in both of their matches against their Central European neighbours.

They would have gone through without the playoffs had they taken their chances.

The margin of error was so narrow for Mancini’s men that it would not make a lot of sense to pin the blame on the management.

A handful of games should not undo the years of good work Roberto Mancini and his coaching staff did.

Roberto Mancini brought about a fundamental change in Italy’s game.

He ditched the conservative approach that had been synonymous with the Italian team and implemented a more dynamic, attacking style.

During his tenure, Italy became a more balanced side, being as ruthless up front as resilient in the back.

As a result, Italy qualified for the Euros with three games in hand, lifted the Euro 2020 trophy, made it to the last four of the UEFA Nation’s League, and went on a world record 37-match unbeaten streak.

It would be illogical to lose sight of these incredible achievements over the last four years.

Another reason to back Mancini is his commitment to youth footballers.

Since taking over the reins, he has capped 35 players and has been in constant contact with Serie A clubs with promising young Italian players.

With many of Italy’s key players approaching retirement, Italy will be going through a transition period with an influx of fresh blood in the coming years.

Roberto Mancini’s track record suggests he is the perfect man to oversee that process and help Italy recover from the setback of missing another World Cup.

Haris Rauf is one of the most important members of Pakistan's pace attack for the T20 World Cup. He has been performing consistently for Pakistan...