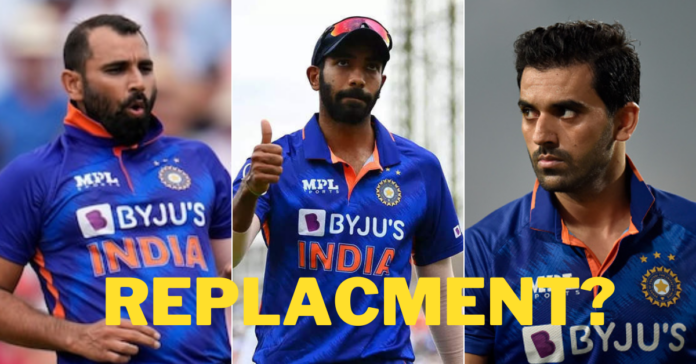 In a massive blow to Team India, Jasprit Bumrah is out of the upcoming T20 World Cup with a serious back injury.

Jasprit Bumrah had missed the Asia Cup in August and September with a back injury but was then picked for the subsequent home T20I series against Australia and South Africa.

“Jasprit Bumrah complained of back pain during India’s practice session on Tuesday,” the BCCI said on Twitter after the toss of the first T20I against South Africa. “The BCCI medical team assessed him. He is ruled out of the first #INDvSA T20I.”

After the win against Australia in the second T20I in Nagpur, India captain Rohit Sharma said it was good to see Bumrah bowling at “full throttle”. “Honestly, coming back after a couple of months, a back injury can be tricky,” Rohit said at the post-match presentation on September 23.

If the latest reports are found to be true, it will be the second time in three years that Bumrah has suffered a major back injury

Who should replace Jasprit Bumrah in India’s squad?

India has two fast bowlers – Mohammed Shami and Deepak Chahar – in their reserves for the World Cup. Teams that have directly qualified for the Super 12 round of the tournament -as India has – can make changes to their squad without ICC permission till October 15.

Mohammed Shami would be the first choice as a replacement for Bumrah because of the pace, swing, and bounce he would bring to Australian conditions. His experience would be crucial as well in a major tournament.

Deepak Chahar has put on some impressive performances since his recovery and has made a successful comeback to the national team. Even though he may not provide the same pace and bounce as Shami, his prowess with the bat give him an advantage over others. He can bat and give the team a useful contribution in the lower order.

If Bumrah doesn’t make the cut, he will be the second major player that India will miss at the tournament, after allrounder Ravindra Jadeja was ruled out by a knee injury.

India is in Group 2 in the Super 12 round of the T20 World Cup, along with Pakistan, South Africa, Bangladesh, and two teams from the qualifying round. India begin their campaign against Pakistan at the MCG on October 23.