Dinesh Karthik or Rishabh Pant? Who will play in T20 World Cup 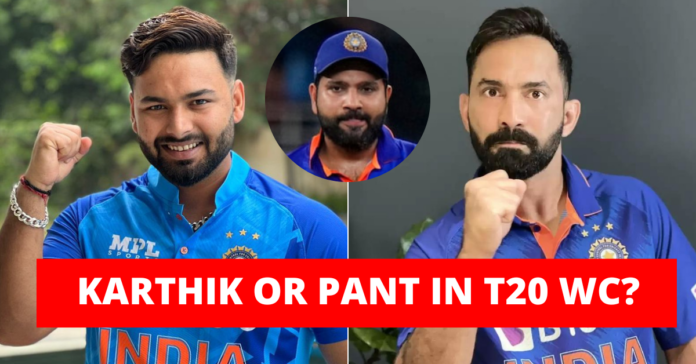 Team India national selectors decided to include both Karthik and Rishabh Pant in the squad as the idea was to test the two wicketkeepers as finishers and also to explore the possibility of playing them together — Pant as the floating batter and Karthik as the finisher.

However, in the recent series against Australia and Asia Cup, Team India has not been able to give enough game time to either Dinesh Karthik or Rishabh Pant which has raised some concerns.

Rohit Sharma admits that both of them did not get enough game time, especially Karthik

Speaking at the post-match press conference after India’s thrilling win over Australia in the third T20I on Sunday, Indian captain Rohit revealed that he wants Pant and Karthik to enjoy some game time before the World Cup.

“It depends on the situation. I obviously wanted these guys to have a number of games under their belt before the World Cup. When we went to the Asia Cup, both of these guys were in the fray to play all the games or whenever there is an opportunity or if there is a tactical matchup, we can bring in those guys. But I just feel that Dinesh needs a little more game time, and so does Pant.”

“Honestly speaking Pant needs some game time as well. But looking at how this series was important for me to just stick to that consistent batting lineup,” said Sharma during the post-match press conference after India defeated Australia by six wickets in the third T20I here on Sunday to win the series 2-1.

Sharma also said that selecting the right-handed Karthik or the left-handed Pant in the playing XI or picking both of them will depend on the situation the team finds itself in.

“We have said that we want to be flexible in our batting, so if the situation or if the thing demands that we need a left-hander, we will bring in a left-hander, if we need a right-hand, we will continue to do that. But I still feel Dinesh in this series hardly got to bat maybe just three balls, so that’s not enough time.

“But we will try and manage those guys pretty carefully. I do understand they need game time before the World Cup but there are only 11 players you can play, unfortunately so we just have to look after everyone,” the skipper added. (With IANS inputs)