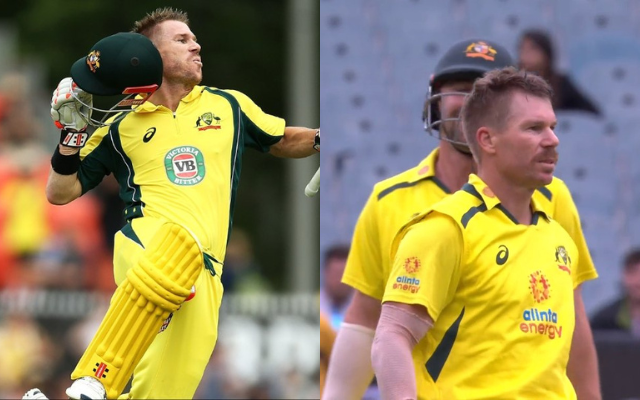 After 1043 days without an international century, David Warner ended the drought in a clinical fashion in front of the MCG crowd against England in the third ODI

Australia opener David Warner on Tuesday scored 106 runs off 102 deliveries against England in the third ODI in Melbourne. It is Warner’s 19th hundred in ODI cricket. Further, it is his first hundred across formats in international cricket in 1,043 days. Warner slammed eight fours and two sixes in his knock.

The pair put on a stand of 269 in 38.1 overs, falling just short of their own Australian record ODI partnership of 284, to propel Australia to an imposing total of 355 for 5 after the innings was reduced to 48 overs due to rain. They became the second duo in ODI history to post two 250-plus runs stands behind India pair Sachin Tendulkar and Sourav Ganguly.

Speaking at a promotion event for Kayo Sports on Monday, that was not organized by CA, Warner vented his frustration.
“I’m not a criminal,” Warner said. “You should get a right of an appeal at some stage. I understand that they put a ban in place but banning someone for life, I think it’s a bit harsh.
“Where it’s been disappointing, it’s taken this long to get to where it has. It was brought up in I think February this year. So it’s been drawn out. It’s traumatic for me and my family and everyone else that was involved in it. We haven’t needed to go back into that detail. We don’t need to relive what happened.”

Warner set to play in the BBL for Sydney Thunder

David Warner is set to play for Sydney Thunders. The pair worked together as captain-coach at Sunrisers Hyderabad in the IPL.

“If they would like me to do it, I’m happy to put my hand up,” Warner said. “I’ve worked with TB [Bayliss] before. I know a fair few of the players and they know my understanding of the game and what I can bring to the table. But if that decision was up to them, and they’d asked me to do it, then I’d like to push that forward as fast as we can.”