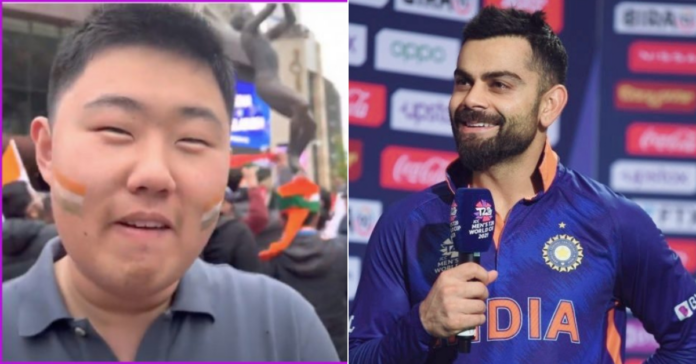 Virat Kohli attracts fans from all across the world

Cricket is considered a religion in India and whenever Team India plays we have fans all over the world cheering. Ahead of Rohit Sharma-led India’s crucial Super 12 clash versus Bangladesh in the ongoing T20 World Cup 2022 edition, on Wednesday (November 02), a video of a Chinese fan cheering for Team India and Virat Kohli has gone viral

The Chinese fan is drawing the attention of cricket fans not just because of his love for the game but also his Hindi diction and funny gestures.

You can check out the full video here :

In a video shared by journalist Vimal Kumar on his Youtube channel, the fan said, “Bharat Mata Ji Jai. Main China se hun lekin Bharatiya cricket team ka fan hun main. Maine Hindi khud seseekhi kyunki mujhe bharatiya sanskriti bahot pasand hai. Main Australia ke ek vishvidyalaya mein padhta hun (I am from China. I am a huge fan of the Indian cricket team. I learned Hindi language on my own due to my fondness of the Indian culture. I am from China but I study at a university in Australia).”

“Mai Indian team ka bahot bada bhakt hu (I am a big fan of the Indian cricket team). Mujhe Bharatiya sanskriti bohot pasand hain (I love Indian culture),” he told journalist and YouTuber Vimal Kumar during their conversation in which he also revealed that he is a fan of former India captain Kohli.

He was also asked which team will win the match and he replied: “Bharat!”

Virat Kohli is my favorite player, says a Chinese fan

Further, the Chinese youngster went on to claim that Virat Kohli, the former Indian captain, is his favorite player and backed Team India in the mega event in Australia. Speaking of Kohli, he is now the leading run-getter with over 200 runs in the ongoing competition and also became the highest run-getter overall in the tournament history surpassing Mahela Jayawardene