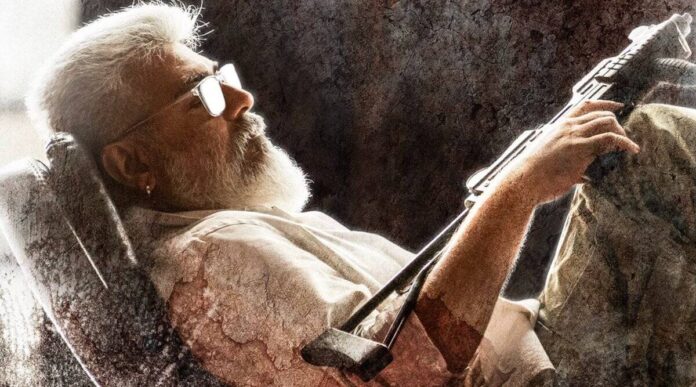 Earlier today, the makers of Tamil superstar Ajith Kumar’s upcoming film ‘Thunivu’ released a new poster, much to the delight of fans.

The new poster features a close-up of Ajith’s face. He wears a thick grey beard that matches his hairstyle, as well as cool sunglasses, allowing fans to do exactly what they want: celebrate Ajith’s looks.

Even in the new poster, Ajith remains solemn. The poster, which was released on Wednesday evening, showed the actor sitting in a lounge chair, holding an automatic rifle. The background also resembled an old Indian rupee note. And the tagline was “no guts, no glory.” All that Ajith’s character seems to be thinking about is doing something extremely dramatic.

H Vinoth desperately needs a win to repair his reputation, which has suffered since his last film, Valimai. The cop drama, Vinoth’s second consecutive collaboration with Ajith, was a colossal flop.

Even Ajith’s most ardent fans couldn’t defend the film. However, thanks to Ajith’s star power, the film is said to have made a profit for its financiers. In that sense, Thunivu represents Vinoth’s chance at redemption.

Boney Kapoor is Vinoth’s financier. It also features Manju Warrier in the lead role. The majority of the film was shot on location in Hyderabad. The release date has yet to be announced by the filmmakers.

At the moment, Ajith appears to have finished filming his parts and is on a bike trip around the country.

This Telugu star joined the cast of Captain Miller.