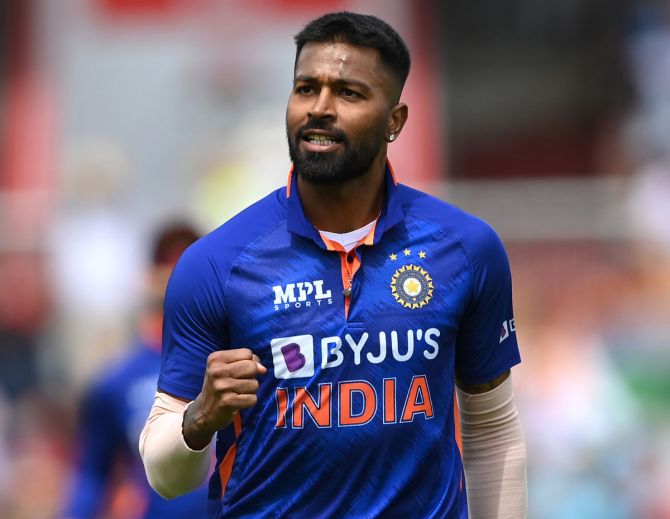 Ravi Shastri admitted there is no one close to him when it comes to quality and hailed him as one of the most important players in Team India’s setup.

Hardik Pandya, who has been named in the India squad for the forthcoming Asia Cup, played the 2021 ICC event as a batter instead of a pure all-rounder.

Hardik was subject to a lot of criticism due to his inability to bowl and eventually took a break from cricket to focus more and recover from his injuries.

Hardik Pandya returned to competitive cricket in the 2022 Indian Premier League, where he captained Gujarat Titans and guided them to their maiden title as well. Pandya displayed his all-around ability, scoring 487 runs in 15 matches, and also performed brilliantly with the ball.

He also took eight wickets, which included a three-wicket haul. Since his return, he has become an important player in the Indian line-up.

“He (Pandya) is one of the most important cogs in the wheel as far as India is concerned,” Shastri said in a press conference organized by Star Sports, the official broadcaster of Asia Cup 2022.

“You take him out of the squad and the balance goes away. That’s how important he is. You don’t know whether to play an extra batsman or an extra bowler.

“We missed him really badly last year in the (T20) World Cup when he couldn’t bowl. It makes a massive difference.” Ravi Shastri noted

There is no one close to him when it comes to the quality that he possesses at that number. I think he is an extremely important player and has to be watched very closely.” Shastri added

“With the number of matches coming up, he is the last person you want to play in all those matches,” Shastri said

Yuzvendra Chahal also praised the stylish all-rounder for his batting versatility and discussed how Hardik has improved as a bowler.

“Hardik has changed completely, we saw him batting at No.7 earlier. I think when he went to Gujarat Titans from Mumbai Indians, he realized he can bat higher up the order,” he said

“Any batter who can hit right from the crease is difficult to bowl to him. He is batting like a proper batter, which has given us more strength,” said Chahal on Sports Yaari.

Yuzvendra praised Hardik’s bowling and said that his bouncer is “really deceptive”.

While Hardik Pandya was rested for the three-match ODI series in Zimbabwe, he will be back in the Asia Cup, which begins on August 27 in the United Arab Emirates.

IPL 2022 proved to be the major turning point where he got regained his form.

He led Gujarat to their maiden IPL title in 2022, becoming the first captain after Shane Warne to lead a team to the title in its first year.