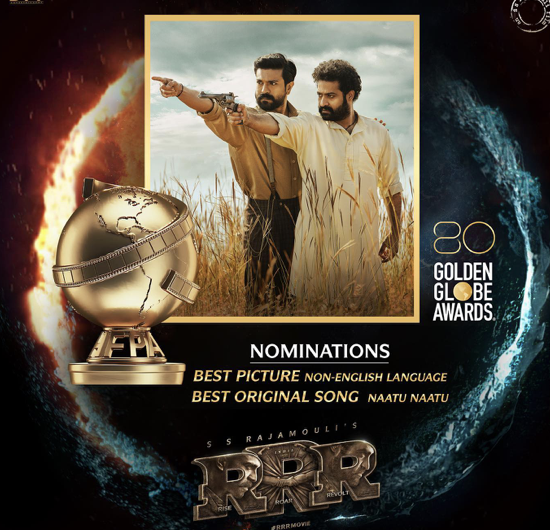 The history creating track from the director SS Rajamouli’s blockbuster movie is composed by MM Keeravani.

The singers are Kaala Bhairava and Rahul Sipligunj.

“Naatu Naatu,” which became an anthem of sorts for the Rajamouli fans is a dance number featuring Jr NTR and Ram Charan.

It created ripples for its elaborate choreography and musical storytelling.

Natu Natu left behind Taylor Swift’s “Carolina” from Where the Crawdads Sing, “Ciao Papa” from Guillermo del Toro’s Pinocchio, Lady Gaga’s “Hold My Hand” from Top Gun: Maverick, and “Lift Me Up” from Black Panther: Wakanda Forever, performed by Rihanna.

The historical epic, RRR had also been nominated in the Best Non-English Language Film category at the 80th Golden Globes.

The awards are considered a precursor for the Oscars.

Talking more about the song ‘Naatu Naatu,’ he explained that it’s a “song of celebration” and that the creators wanted to showcase stamina and energy in the song.

Accepting the award, MM Keeravaani said, “Thank you very much HPFA for this prestigious award. I am very much overwhelmed by this great moment. I am very happy to share this excitement with my wife.”

“There has been an age-old practice to say that this award actually belongs to someone else. I was planning not to say those words when I get an award like this. But, I am sorry to say that I am going to repeat the tradition because I mean my words.”

“This award belongs to, in order of priority, my brother and director of the movie SS Rajamouli. I thank him for his vision, trust in my work and his constant support. I also want to thank NTR Junior and Ram Charan, who danced with great stamina.”

In a tweet, Mr. Modi said this prestigious honour has made every Indian very proud.

He said, RRR won hearts and is making history around the world by enthralling movie lovers.