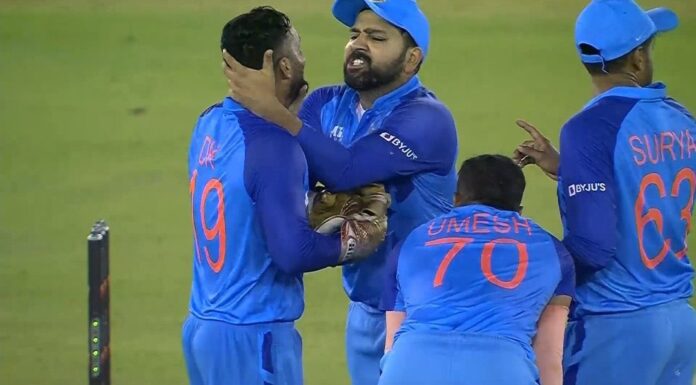 The video soon went viral on social media and soon memes were shared by netizens. The incident happened during the first T20I against Australia at Mohali on Tuesday. The viral video showed Rohit Sharma scolding and grabbing Dinesk Karthik’s neck during a DRS review

It was a forgettable night for the Indian cricket team on Tuesday as they lost the first T20I by four wickets against Australia in Mohali.

What Rohit told to DK??? pic.twitter.com/3JHkvoJjXP

Skipper Rohit lost his cool on wicketkeeper Dinesh Karthik during the match. After Axar Patel removed Aaron Finch early, Yuzvendra Chahal trapped Steve Smith in front of the stumps. What was surprising was that there was no appeal for leg-before.

Later, the replays showed that the ball was going on to hit the stumps. When Rohit saw the footage on the big screen, he was furious over the bowler and the wicketkeeper Dinesh Karthik.

A little later, Karthik wasn’t sure when Umesh Yadav trapped Glenn Maxwell in front of the stumps. Despite that, Rohit went for the review and then hilariously gave a death stare to Karthik.

Despite putting up a big total of 208/6, the Rohit Sharma-led side failed to defend the score as Australia reached the target in 19.2 overs.

Matthew Wade (45 not out off 21) and Cameron Green (61 off 30) played special knocks making the target of 208 runs look very easy. Australian all-rounder Cameron Green credited opening partner Aaron Finch for keeping him calm at the crease as he opened for the first time in a T20I.

After playing a match-winning knock in the first T20I of the three-match series against India, the all-rounder said that he had watched the Indian batters play and that gave him an idea of how to pace his innings.

“We had the luxury of seeing the Indians bat and Hardik must be one of the best in what he does, it was a pleasure to watch him. It was kind of good to watch them bat, and that gave us an idea about how to go about while chasing,” Cameroon Green said

In the match, India’s shortcomings with the ball were on display. Batting first, KL Rahul (55 off 35 balls) and Hardik Pandya (71 not out off 30 balls) helped India post a daunting 208 for six after Australia put the hosts in to bat.

Team India bowlers had a disappointing day as all the bowlers went for big runs yesterday. They were not able to stop the onslaught as the Australian batsman picked them apart.