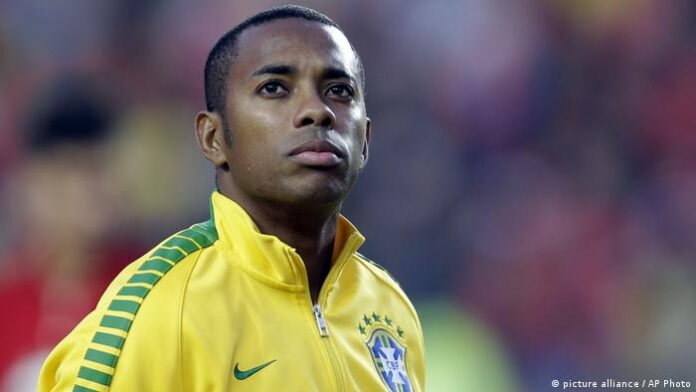 Former Brazil forward Robinho has been sentenced to nine years in prison for his part in a violent sexual assault in a Milan nightclub in 2013.

Robinho, who was playing for AC Milan at the time, was part of a group who gang-raped a 23-year-old Albanian woman at the Sio Cafe nightclub and was originally sentenced in 2017, having gone on to lose two appeals.

he ex-footballer has no further right to appeal, meaning that the latest ruling by the Rome court is final. However, it remains to be seen whether he will serve his sentence in a Brazilian or Italian jail.

Robinho‘s friend Ricardo Falco is in the same situation, although four others left the country before they could be cited and convicted. Robinho, 37, was still playing professional football as recently as 2020, three years after the original sentence and seven years after the crime took place.

The former Brazil international claimed that the relations had been consensual and their defence consisted of discrediting the victim by claiming she liked to drink a lot.

After the initial conviction in 2017, the Milan appeals court upheld the verdict in 2020 and said that “the victim was humiliated and used by the player and his friends to satisfy their sexual urges”.

Now, a tribunal in Rome has once again upheld the original sentence and Robinho will have to pay 60,000 euros in damages to the victim, which was also part of the 2017 ruling.