MS Dhoni was the only one to text me after I left Test captaincy: Virat Kohli 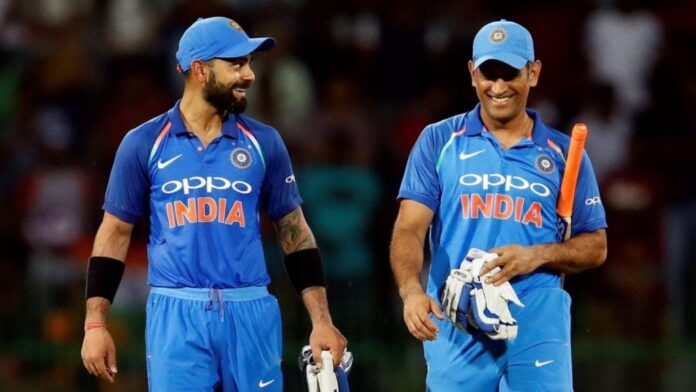 Virat Kohli revealed that only MS Dhoni texted him when he left the Test captaincy in January this year.

After the match against Pakistan, Kohli addressed a press conference yesterday about MS Dhoni and his batting form.

Virat Kohli said he is excited to find his mojo again and enjoys playing the game, getting his form back.

There was a lot of talk about Virat Kohli‘s batting prior to the Asia Cup, but he has found his batting form again in the Asia Cup.

This was a long and challenging phase for Kohli, who revealed he got only genuine support from, MS Dhoni during his low phase.

In the three matches so far, the right-handed batter has scored 154 runs with his highest score being 60 which came in the Super 4 stage against Pakistan on Sunday.

Team India lost the contest in a thriller by five wickets and they will now square off against Sri Lanka on Tuesday at the same venue.

After the match, Kohli addressed a press conference, where he revealed that only MS Dhoni texted him when he left the Test captaincy in January this year.

He also revealed that the suggestions are best when given in a 1-1 capacity rather than in front of the entire world.

“When I left Test captaincy, I only received a message from one person and I have played with that person in the past. That person is MS Dhoni, anyone else did not message me.”

“Many people have my number, and there are many people who give me suggestions on TV.”

“There was just MS Dhoni who messaged me, many people have my number, but they did not text me.”

“When you have genuine respect and connection with someone, you are able to see that because there is security from both sides,” said Kohli during a post-match press conference.

“I was never insecure about him and he was never of me.”

“Even if you want to help. If you want to give a suggestion to me in front of the TV or the whole world, it does not hold any value to me.”

“You can talk 1-1, I see things with utmost honesty. It is not like I do not care, but you see the things how they are.”

“God gives you everything, only God helps you achieve success and it is all in his hands,” he further added.

Virat Kohli talked about the defeat against Pakistan

Talking about this moment, Kohli said: “Anyone can commit the mistake, the situation was tight. It was a high-pressure game and mistakes can happen. I still remember I was playing my first Champions Trophy and the match was against Pakistan, I had played a very bad shot against Shahid Afridi. I was watching the ceiling till 5 am, I was not able to sleep and I thought my career is over but these things are natural. Seniors players get around you, there is a good team environment right now, I give the credit to the captain and coach. The players learn from their mistakes. So one must accept his mistake, address it and look forward to being in that pressure situation once again.”

Talking about Hardik Pandya and Suryakumar Yadav, the former skipper said: “Both Hardik and Suryakumar Yadav have been brilliant. Hardik has realized his potential fully. From the IPL that happened this time around, he has become a different character, very responsible and very aware of his abilities. That is the difference I see, he realizes what he can do as an all-rounder and he is working as hard as I have ever seen him. To play like this and get back to full bowling fitness will be a massive factor. And Suryakumar, I do not think there are hardly any players in world cricket who can play like that, once he gets going, he can take the game away,”