Messi vs. Ronaldo ends in a goalfest as PSG win 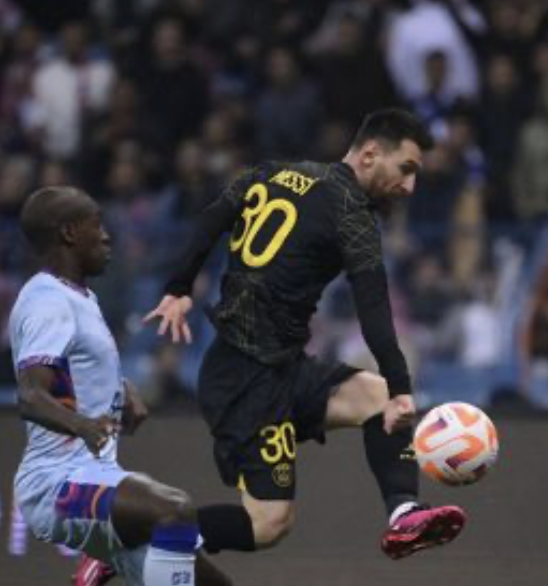 It was a match for the ages as Cristiano Ronaldo and Lionel Messi faced off in an exhibition game between PSG and Riyadh Season Team, on Thursday, giving soccer fans around the world a chance to relive their epic rivalry.

The game may not have had any real significance for the teams involved, but for fans, it was a chance to witness a piece of soccer history.

The first half was a goal-scoring frenzy, with both teams trading blows.

Messi got things started for PSG in the 3rd minute with a sneaky finish, played through on goal by Neymar.

The Argentine was able to poke the ball past goalkeeper Mohamed Al-Owais, who he last faced in Saudi Arabia’s shock World Cup win over Argentina in November.

But Ronaldo wasn’t one to be outdone and quickly responded with a brace of his own, the first goal being a penalty goal which he won himself after goalkeeper Keylor Navas clattered into him.

Sporting a bright red bruise on his cheek as a result of the collision, Ronaldo picked himself up to calmly convert the spot kick and level the game.

The second goal was a rebound goal after Sergio Ramos botched a straightforward clearance on the verge of halftime.

Things got a little heated when PSG’s Juan Bernat was sent off for a wild tackle, but the action on the field didn’t slow down one bit.

The second half was just as exciting, with both teams pushing for the win.

The goals continued to come thick and fast after the break, as Ramos turned in a Kylian Mbappe cross to make it 3-3 before South Korean Jang Hyun-soo replied with a near-post header from a corner to make it 3-3.

A handball by Ali Al-Bulaihi gave the visitors a penalty, which was expertly dispatched by Mbappe on the hour.

It was Mbappe’s last contribution, as he was taken off shortly after, along with team mates Messi and Neymar, as well as Ronaldo.

Ekitike then extended PSG’s lead to 5-3 with a thumping finish following a lung-busting run from the halfway line before Anderson Talisca scored a late consolation goal for the Riyadh Season Team in added time.

But it was Hugo Ekitike who sealed the deal for PSG with a 78th-minute strike that sent the crowd into a frenzy. Ronaldo and Messi may have had to leave the field, but the memories of their epic showdown will live on.

It wasn’t all about the big names though, as the Riyadh Season Team – a combined Saudi Pro League XI – had their fair share of chances and goals.

The Saudis even managed to score a late goal in added time, making for an exciting finish to an already action-packed game.

The Riyadh Season Team may have been the underdogs, but they gave it their all and put up a good fight.

Though Ronaldo may not have gotten his newest chapter in Saudi Arabia off to a winning start, he’ll take heart from his performance as he prepares to make his first competitive appearance for Al Nassr when they host Al Ettifaq on Sunday.