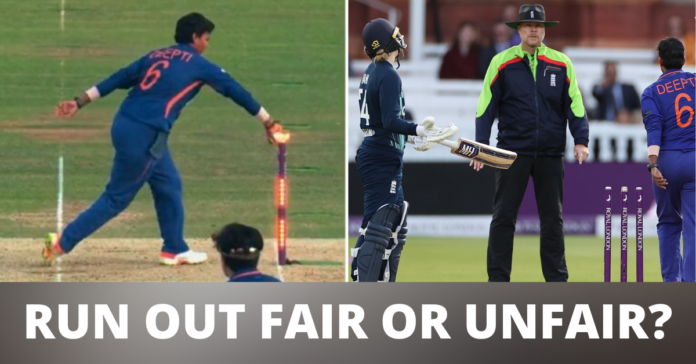 The run-out dismissal by Deepti Sharma meant India sealed a clean-sweep win in the three-match series, but it invoked a lot of mixed reactions from cricketers and fans alike. Now the MCC has issued an official statement.

Deepti Sharma had run out Charlotte Dean at the non-striker’s end in the 44th over of England’s chase when the hosts required only 17 of the last 38 balls. The dismissal, despite being well within the laws of the game, sparked a massive ‘Spirit of cricket’ debate

“Law Is Clear”, says MCC on Deepti Sharma Run Out

The MCC came out with a statement a day after the incident clarifying its stand on the subject Their official statement read :

“MCC this year announced amendments to the laws of cricket to move being run out at the non-striker’s end, from law 41 unfair play to law 38 run out,” the statement started.

“This was done to clarify this matter and to place an onus on batters to ensure that they do not leave the crease at the non-striker’s end, prior to a bowler releasing the ball,” the MCC wrote.

“The Law is clear, as it needs to be for all umpires to be able to easily interpret throughout all levels of the game and at all moments in the game,” it stated.

“Cricket is a broad church and the spirit by which it is played is no different.  As custodians of the Spirit of Cricket, MCC appreciates its application is interpreted differently across the globe. Respectful debate is healthy and should continue, as where one person sees the bowler as breaching the Spirit in such examples, another will point at the non-striker gaining an unfair advantage by leaving their ground early,” the MCC wrote.

“MCC’s message to non-strikers continues to be to remain on their ground until they have seen the ball leave the bowler’s hand.  Then dismissals, such as the one seen yesterday, cannot happen,” it stated.

“Whilst yesterday was indeed an unusual end to an exciting match, it was properly officiated and should not be considered as anything more,” the statement added

The MCC had earlier this year moved the mode of dismissal from the ‘unfair play’ section of their laws to the ‘run out’ section, and the ICC is set to also adopt that change from October 1.

Running between the wickets is a skill: Ian Bishop

“Plain and simple. Keep your eyes on the bowler and ball all the way through to ball releases like Virat Kohli and Kane Williamson and these arguments go away. Let’s teach our young kids to back up like these two great players,” Bishop tweeted.

“Running between the wickets is a skill. Batters are trying to anticipate bowler ball release to get a quick start like in a sprint race or they are careless or they are trying to gain an unfair advantage, or just plain lazy. Either way, it’s no excuse,” he added. ( Source – Crictracker )

Following the trend, India’s ace spinner R Ashwin said that Deepti should be given a bravery award.

In fact that’s a great idea. How about awarding that wicket to the bowler for “ presence of mind” under immense pressure and of course knowing the social stigma that he/she would have to deal with post doing it. How about a bravery award to go with it too @ICC ? https://t.co/9PqqetnnGw

What do you think about this run-out controversy? Was it fair or unfair?