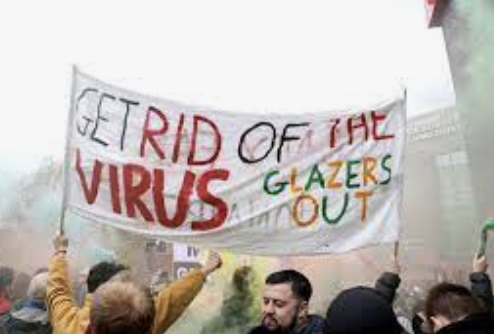 Thousands of Manchester United fans marched on Old Trafford to protest against the Glazer family ahead of Monday’s Premier League clash with rivals Liverpool.

The recently-formed group ‘The 1958’ led the latest demonstration against the Americans before kick-off.

Fans congregated at the Tollgate pub, about half a mile from the stadium, for the planned rally before the game.

From there, the crowd moved towards Old Trafford, with more supporters joining en route.

There were several banners on display that encapsulated the dismal mood of the fans.

‘United for $ale’ said a banner.

The banner also bore an image of Sir Jim Ratcliffe, the British billionaire who expressed an interest in buying the club last week.

Another message read, ‘We want our club back’.

Smoke from flares filled the air and there was plenty of anti-Glazer chanting.

A large police presence monitored the event, which reached Old Trafford about 30 minutes before the game.

With the march finishing near the United ‘Trinity’ statue outside the stadium, where hundreds of fans had already congregated, many Liverpool supporters were held back in a car park by police to avoid trouble.

The demonstration was largely peaceful although there were some isolated incidences of missiles being thrown at the Liverpool fans.

The Liverpool fans also joined the protests in their own way.

They sang ‘Up the Glazers’ and brought out hundreds of masks of Avram Glazer, United’s executive co-chairman and director.

The anger of the fans is justified.

Even their Carrington training base is also considered second rate.

Club legend, Gary Neville, spoke out against the Glazers, echoing the fans’ feelings.

“There’s no leadership, no voice, you can’t blame individual players or the manager. You have to look above, you have to look at the very top. This week, they’re going to get peppered.”

“But there’s a family over there in America who are letting their employees take all the hits and that is unforgivable.”

“Joel Glazer has got to get on a plane tomorrow, get over to Manchester and tell everyone what the hell his plan is with the football club.”