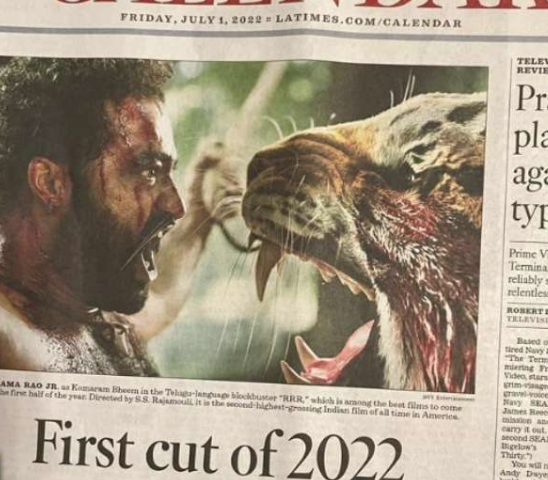 We are talking about the epic blockbuster that hit Indian screens recently and created cinema history.

RRR has been featured in the Best Films of 2022 list by the Los Angeles Times, one of the largest-circulated newspapers in the United States of America.

Reacting to the news, the official Twitter handle of RRR responded, “Glad to see #RRRMovie featured in the LA Times ‘The best movies of 2022’ list”

It also added a red heart emoji and hands up emoji.

The extravaganza set in the British era, collected around Rs 1200 crore worldwide.

It has been garnering acclaim from international artists and publications for its unique plot and over-the-top action sequences.

This is one of the hardest-to-win awards ever.

The winner was the cult comedy – Everything Everywhere All At Once which swept the awards and won in every category it was nominated for.

Nevertheless, it was a huge honour for RRR and a recognition of Indian cinema on the world stage.