KRK arrested over controversial tweets from 2020. 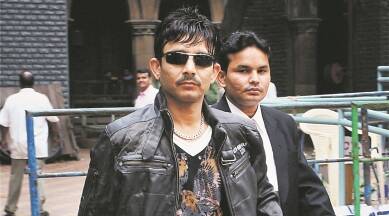 Kamaal R Khan aka KRK has been arrested from the Mumbai international Airport after being detained and interrogated.

The actor has been sent to 14-day judicial custody by the Borivali Court today.

According to police officials, KRK was arrested over FIR filed against his controversial social media posts back in 2020.

The FIR was lodged on the basis of a complaint by Yuva Sena leader Rahul Kanal on April 30, 2020 where he claimed that Kamaal r Khan’s tweets about Late actors Rishi Kapoor and Irfan Khan was spreading ‘Hatred’.

Rahul Kanal had mentioned in the FIR that a person named Kamaal R Khan is “regularly spreading hatred” on social media.

“He came into Bollywood with a movie named ‘Deshdrohi’ and is really acting like one. Even when the world is going through a pandemic, I can’t understand his inhumane behaviour and spreading hatred in all spheres of life.”

“After Irrfan Khan, who is India’s pride, passed away, he was making poor claims and statements on him. He was also talking crap about senior actor late Rishi Kapoor also,” Rahul added.

“This person is surely not in our country. I would like to urge our Prime Minister to kindly register a case against him under sections 505, 504, 501, 188, 117, 121 and 153 (A) of the Indian Penal Code (IPC), thereby setting an example for everyone to follow,” said Rahul summing up his complaint.

According to several reports, KRK has applied for bail as of now.

Social media users on the other hand are having a riot by sharing memes on his arrest all day. Check some of them below.

Meanwhile KRK before the Arresting: 🥺🤲 pic.twitter.com/yHIXphRoHt

That’s hilarious for sure. Will KRK’s bail appeal be accepted? Let’s see.

The 67th Wolf777news Filmfare Awards are tonight! Read everything you need to know here.