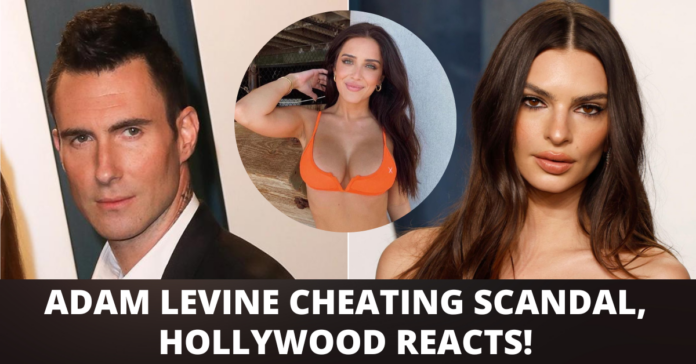 Adam Levine is making headlines for cheating on his wife and Victoria’s Secret angel Behati Prinsloo. The drama around the scandal is getting intense and has received negative reactions from fans and celebrities alike.

Adam Levine recently responded with a statement after an influencer Sumner Stroh accused him of cheating on his wife Behati Prinsloo with her and also alleged that he tried to name his baby after her.

Emily Ratajkowski seemingly addressed the infidelity scandal surrounding the Maroon 5 singer after her estranged husband, Sebastian Bear-McClard, allegedly cheated on her, too. In a TikTok video, the model said, “I don’t understand why we continue to blame women for men’s mistakes, especially when you’re talking about 20-something-year-old women dealing with men in positions of power who are twice their age.” Emily further suggested relating to Levine’s statement about the scandal adding, “If you’re the one in a relationship, you are the one who’s obligated to be loyal.”

Selling Sunset star Chrishell Stause seemingly called out the singer for his recent statement as she wrote on Twitter, “Don’t speak for her. You’ve done enough.”

Levine took to Instagram Stories and shared his side of the story.

In his statement issued on Tuesday, Levine said, “A lot is being said about me right now and I want to clear the air. I used poor judgment in speaking with anyone other than my wife in ANY kind of flirtatious manner. I did not have an affair, nevertheless, I crossed the line during a regrettable period of my life.”

“In certain instances it became inappropriate; I have addressed that and taken proactive steps to remedy this with my family,” he added.

“My wife and my family are all I care about in this world. To be this naïve and stupid enough to risk the only thing that truly mattered to me was the greatest mistake I could ever make. I will never make it again. I take full responsibility. We will get through it. And we will get through it together,” he concluded.

The statement did not go down well with Sumner Stroh. The model shared a cryptic post on her Instagram Stories that read, “Someone gets this man a dictionary.”