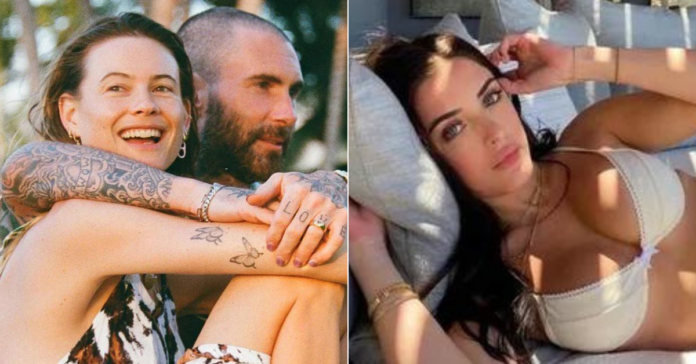 In a TikTok video posted Monday, Sumner Stroh shared screenshots of Instagram DMs from Levine saying, ‘It is unreal how f***ing hot you are. Like it blows my mind.’

Sumner Stroh, who has just under 350,000 Instagram followers, made the allegations in a TikTok video posted Monday.

“I was having an affair with a man who’s married to Victoria’s Secret model. At the time, I was young, I was naive, and, I mean, quite frankly, I feel exploited,” Stroh said in the video.” she said

Levine has been married to Prinsloo since 2014. The couple announced this month that they are expecting their third child. They have two daughters, who are 4 and 5.

Instagram model says she had an affair with married Maroon 5 frontman Adam Levine.

Stroh shares screenshots of Levine asking if he could name his unborn third child with supermodel Behati Prinsloo after her. pic.twitter.com/glsXHgAfKF

“Maroon 5 is practically elevator music at this point. So, I’m sure you know who Adam Levine is. Adam and I were seeing each other for about a year, after I stopped talking to him over a period of months, this is how he came back into my life,” she continued.

The Instagram model showed an alleged DM that she received from Levine in which he asked if it was okay with her if he names his unborn baby after her.

“Ok serious question. I’m having another baby and if it’s a boy I really wanna name it Sumner (sic). Are you ok with that? DEAD serious,” read the message

She said she “never wanted to come forward,” knowing “the implications that come with doing what I do, making money the way I do, and being an Instagram model,” and the “stereotypes” associated with being an influencer.

“Aware many people will try to fill in the gaps with many false assumptions,” she wrote in an Instagram story after posting the TikTok.

“I don’t feel like I’m doing any favors, considering the manner this had to go about. It’s a lot to digest but hopefully, at the very least, the truth being out can do some good,” she added

“Embarrassed I was involved w a man with this utter lack of remorse and respect,” she captioned her video.

Sumner Stroh’s video was viewed 7.5 million times in the 10 hours after she posted it.

She later posted a second video responding to critics and saying that she wasn’t trying to play the victim.

“In no way was I trying to gain sympathy,” she said. “And I fully realize I’m not the victim of this. I’m not the one who’s really getting hurt here. It’s Behati and her children, and for that, I’m so so sorry.”

Sumner Stroh also clarified what she meant when she claimed she was manipulated.

“The most important part that I did definitely gloss over is the fact that I was under the impression that their marriage was over. I believed that they were keeping it quiet to avoid the negative press because, as I had said, I was new to LA, so I just assumed that with celebrities of that caliber, that that’s just how it was,” she said.

“And that’s why I feel exploited because he knew I believed everything that he said because of my vulnerable position of being new to LA,” she said. “Also, he was DMing me straight from his verified Instagram account. I didn’t have any reason to further question it. But I now realize that that was likely a manipulation tactic of his, you know, just hiding in plain sight.”