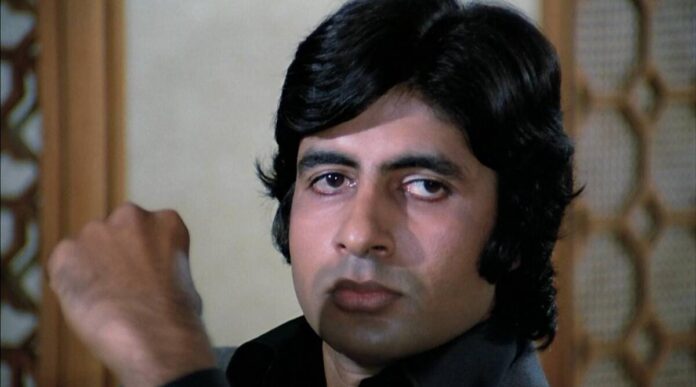 Amitabh Bachchan, the biggest ever star of Bollywood is celebrating his birthday today.

Amitabh is one of those stars who have created a niche in the industry, an impact which will always be known and remembered no matter how much time goes by. On the occasion of his 80th birthday, the forever humble superstar is showered with love and admiration from both the BTown and his fans.

Here’s a list of Amitabh Bachchan’s top 5 movies that you need to watch:

Zanjeer: The slender actor didn’t really have the appearance of a police inspector, but his sombre demeanor and the rage in his eyes overcame everything else. Since then, film cops have been measured against Bachchan’s brilliant performance. Zanjeer is a realistic depiction of an honest cop’s life in a nutshell. It  started with Bachchan witnessing a bolting horse in a nightmare and ended with him having exacted revenge for his parents’ deaths. His best friend is a Pathan, a goon who changed his ways.

It’s full of scumbags and twisted characters and depicts how police have to associate with criminals to acquire information. Pran gave a heroic performance as Sher Khan, a powerful local dada who is willing to make sacrifices. The street gypsy played by Jaya Bhaduri makes the melancholy inspector smile by falling in love with him.

Deewaar: Amitabh Bachchan thrived in the role of a dockyard coolie who became a mobster and is perplexed as to why his mother abandoned him once he reached adulthood. Deewaar resembled Mother India in that it had a rebellious son who was abandoned by a strong-willed mother for his own benefit. All Vijay wanted was his mother’s love, and his criminal behaviour was only a way to get it by giving in to the allure of quick cash. When he realizes the smile isn’t reaching her eyes, his anguish is audible.

Another standout of the movie was his battle with his younger brother Ravi, who was portrayed by Shashi Kapoor; their confrontation scene has since become legendary. “Mere Paas Maa Hai”, Shashi Kapoor’s response to his elder brother when the latter begins recounting his “achievements,” has become a famous line from the movie.

Agneepath: Amitabh Bachchan has portrayed Vijay in countless movies, but his opening sequence in Agneepath, in which he declares his full name as Vijay Dinanath Chauhan, caused a stir when the movie first came out and has since become a famous quote. On one level, it’s a revenge actioner, but on another, it’s also a sentimental family drama. Although Bachchan appears ready to send his adversaries to hell, he actually has a kind heart that beats for his mother, wife, and sister.

His goals in becoming a criminal include getting vengeance with the person who harmed him and Bachchan is a man on fire for a reason, and he never lets us forget that. When it was first released, the movie tried out a different voice for Bachchan, but subsequently, in response to fan requests, he redubbed the movie in his original voice. Some claim that this mix-up is the reason why it failed to become a hit when it was first released. However, it is now regarded as a cult masterpiece.

Don: Amitabh Bachchan, who plays the real Don, delivers a lesson on how to portray a vicious, heartless monster in the first half. It almost seems like his real wicked twin is playing the part for show. Don (Amitabh Bachchan) is a cunning criminal who consistently outwits the law. Officer D’Silva (Iftekhar) meets Vijay (Amitabh Bachchan), a straightforward villager who takes care of two foster kids. D’Silva prepares Vijay to play Don after Don is murdered in an encounter; Vijay agrees to it for the money. As Don, Vijay re-enters the criminal underground and becomes the talk of the neighbourhood.

Roma (Zeenat Aman), the sister of a guy Don had slain, had infiltrated the gang without Vijay’s knowledge in order to murder Don. Sadly, D’Silva was slain, therefore no one is left to confirm Vijay’s true identity. The underworld is aware that he is not Don, but the cops believe he is. Thankfully, Roma and Jasjit (Pran), the father of the two kids he was looking after, are now helping him. The three beat overwhelming odds to apprehend the genuine underworld boss.

Shakti: In the movie, Amitabh Bachchan and Dilip Kumar faced off against each other on the big screen. Bachchan portrayed a rebellious kid who turned to a life of crime in defiance of his policeman father’s rigorous upbringing.

His progression in the criminal ranks was a sort of comeback from Deewaar, but the hurt and isolation he felt towards his own father was dreadfully genuine. One of the best death scenes, starring two outstanding performers at their very best, is the final scene where he is dying in his father’s arms after being shot to death. Smita Patil and Raakhee provided the two male stars in the movie with competent support, while a young Anil Kapoor can be seen in one of his earliest Hindi-language movie performances.

Here’s wising the superstar a Happy Birthday and may he continue his reign.